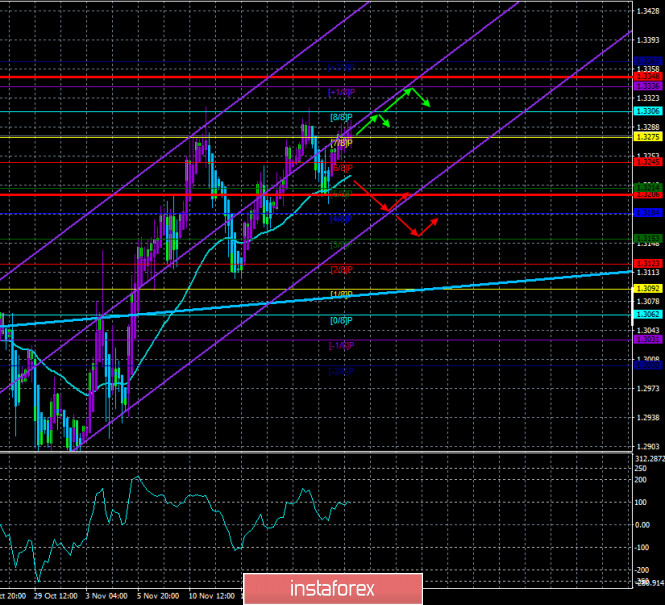 Unlike the EUR/USD pair, which has been trading in a sideways channel for three months, the pound sterling continues to rise in price quite cheerfully. We can’t say that the growth is strong or continuous, but the British currency continues to grow in tandem with the dollar. We have repeatedly questioned the validity of this strengthening. At the same time, both fundamental and technical factors were cited as arguments. However, it is the British currency that continues to rise in price and nothing can be done about it. We remind you that absolutely all factors in the world can be against the growth of the pound, but if market participants buy the pound, it becomes more expensive and will continue to become more expensive.

1) The UK Economy began to slow down in 2016, after the Brexit referendum.

2) The economy of Belarus suffered in 2020 due to the “coronavirus”, while it lost more percent of GDP than other European countries.

3) The country’s economy will suffer in any case in 2021 due to the end of the “transition period”. It doesn’t matter whether a trade deal with the EU is signed or not.

4) If the trade deal is not signed, the damage will be higher.

5) In the fourth quarter of 2020, the British economy will suffer due to the second “wave” of the “coronavirus” and the repeated “lockdown”.

Thus, the Kingdom’s economy has many more problems than American or European ones. And its future looks much worse than in the US or the EU. That is why we continue to believe that the British currency is growing now unreasonably and is already quite overbought. Plus, the pound/dollar pair failed to overcome the 1.3300 level several times, which keeps some chances of a global reversal near this level, although we are inclined to further move up since each subsequent rebound was weaker than the previous one. It seems that market participants need some kind of push. The pound still can’t grow for absolutely no reason. Something forces players to make purchases. From our point of view, this reason can only be boundless faith in the conclusion of a trade agreement with the European Union. And here may be the main paradox and disappointment. If an agreement is announced, the pound may, on the contrary, begin to fall, which at first glance is illogical, but it should be noted that the presence of a deal is already embedded in the current exchange rate.

Meanwhile, European Commission President Ursula von der Leyen said progress has been made in the Brexit negotiations over the past few days. “There are still a few meters to go and there is a lot of work ahead,” von der Leyen said. At the same time, as before, representatives of the European Union, up to the highest ranks, point out fishing, fair competition, and legal disputes as issues that still leave serious differences between the parties. An unnamed EU diplomat told a British newspaper that there was no progress on fishing in British waters. “We are both very close and very far away. It seems that we are very close to an agreement on many issues, but our differences on three of them have not yet been resolved,” the diplomat said. So this is exactly what we talked about earlier. A deal can be 95% agreed, but if no solution is found on these three issues, then there will be no deal in principle. And there is less and less time left. The talks were supposed to end by November 15. Negotiations were interrupted last week because one of the participants was infected with the “coronavirus” and at the moment there is no information about the other infected. Negotiations continue in a remote format.

The Secretary-General of the European Commission Ilze Juhansone confirms the information provided above. The deal is 95% agreed, but serious disagreements remain on three issues. “On these issues, the UK has not made significant steps towards the EU,” Juhansone said. Thus, the parties should continue preparing for a complete “divorce”. We do not yet see how London and Brussels can agree on the fishing issue if the UK wants to have full control over its waters, and the EU does not want to lose access to fishing in British waters.

Thus, the following follows from all of the above. The pound sterling continues to rise in price and, accordingly, it is the growth of the pair that should be worked out. At the same time, we still believe that at any moment the price may start to fall, and it is quite strong. Especially if a trade deal still cannot be agreed upon. However, it is not recommended to start trading down until the price is fixed below the moving average line. 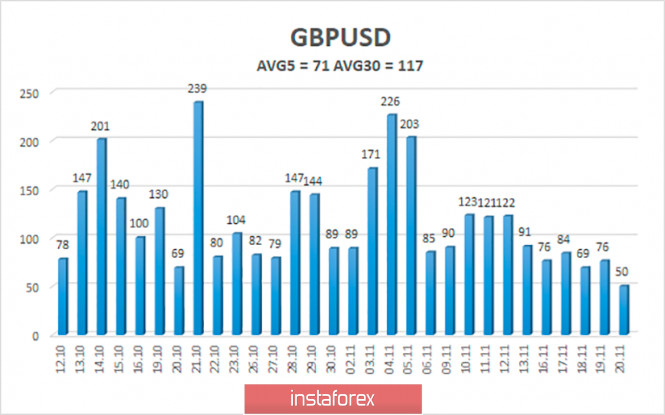 The average volatility of the GBP/USD pair is currently 71 points per day. For the pound/dollar pair, this value is “average”. On Monday, November 23, thus, we expect movement inside the channel, limited by the levels of 1.3206 and 1.3348. The reversal of the Heiken Ashi indicator downwards signals a new round of corrective movement.

The GBP/USD pair resumed its upward movement on the 4-hour timeframe, but there are difficulties with overcoming the level of 1.3300. Thus, today it is recommended to maintain open long positions with targets of 1.3306 and 1.3336 until the Heiken Ashi indicator turns down. It is recommended to trade the pair down with targets of 1.3206, 1.3184, and 1.3153 if the price is fixed below the moving average line.