The hourly chart of the GBP/USD pair. 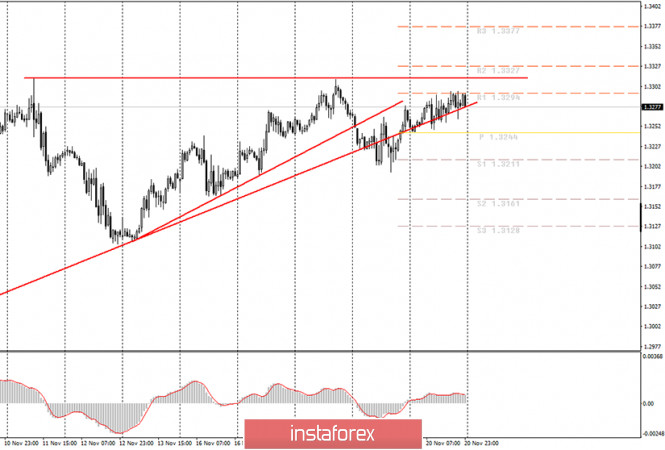 For the GBP/USD currency pair, trading during the last trading day and the entire week as a whole raised a lot of questions. In the illustration, novice traders can see two upward trend lines, below which the price was fixed at different points in time. However, neither after the first nor after the second case did a downward trend begins, which would be as logical as possible in the current technical picture. However, both times the upward movement resumed instead. Also, the price twice worked out the level of 1.3313 (marked with a horizontal segment) and both times bounced off it, but it also did not start a downward trend. However, this level now gives us a good reference point. If the price manages to overcome the level of 1.3313, the movement of the pound / dollar pair up is likely to continue. If traders do not manage to overcome this level, it is only a matter of time before the downtrend begins. We also pay attention to the fact that the fundamental background also does not contribute to the upward movement. And we have listed only the most obvious factors that are clear to novice traders. There are other points that also speak not in favor of the rise in the price of the British currency.

Let’s start with our fundamental part of the review, which we will say about the weak volatility of the pair on Friday. And also about the continuing upward movement during the day. Only one more or less important report was published on Friday – on retail sales in the UK. Both indicators (including fuel and excluding fuel) exceeded the forecast values and could provide small support to the pound. However, in general, we can say that the markets are now paying minimal attention to macroeconomic statistics. They also refuse to take into account the fact that there is still no Brexit trade deal between the UK and the European Union. There is no official information that would indicate that the agreement can be signed in the near future. There are only various rumors, expectations, forecasts, and “insider information” from various sources. However, this is an absolutely normal situation for both traders and the pound. Market participants like to “play ahead”, that is, try to predict what the pair’s exchange rate will be in the future and make money on it. Therefore, the growth of the pound can now be explained only by the belief of the majority of participants that the deal will still be signed. The pound in the last four years also likes to get more expensive on rumors and expectations. However, we still recommend that beginners try to work out reliable information. For example, if it becomes known that London and Brussels have not come to an agreement, the pound will almost definitely fall down by 300-500 points.

On November 23, the following scenarios are possible:

1) We recommend that novice traders consider buying the pair if they overcome a fairly important and strong level of 1.3313. and, of course, if they receive reliable information about the conclusion of a trade agreement(although there may be a situation when the pound becomes cheaper on this information, so do not forget about the Stop Loss levels and technical signals). The goal is 1.3377.

2) Sales, from our point of view, are now more appropriate, and for a large number of reasons. Both upward trend lines have been overcome, and two bounces have been made from the 1.3313 level. Thus, we would recommend selling the pair with targets of 1.3244 and 1.3211 on Monday using a new MACD signal for sale or an existing one. But also don’t forget about the Stop Loss levels.

What’s on the chart:

Price support and resistance levels – target levels when opening purchases or sales. You can place Take Profit levels near them.

Red lines – channels or trend lines that display the current trend and indicate which direction is preferable to trade now.

Up/down arrows-show when you reach or overcome which obstacles you should trade up or down.

MACD indicator – a histogram and a signal line, the intersection of which is a signal to enter the market. It is recommended to use it in combination with trend lines(channels, trend lines).

Important speeches and reports (always included in the news calendar) can greatly influence the movement of the currency pair. Therefore, during their exit, it is recommended to trade as carefully as possible or exit the market in order to avoid a sharp reversal of the price against the previous movement.

Beginners in the Forex market should remember that every trade cannot be profitable. The development of a clear strategy and money management is the key to success in trading over a long period of time