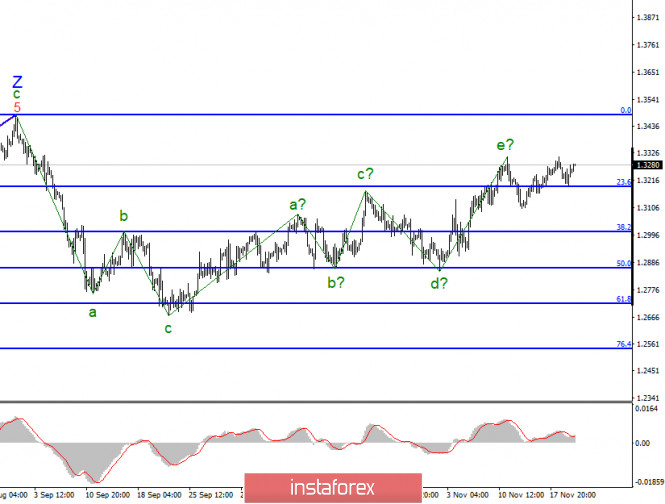 The lower chart clearly shows the a-b-c-d-e waves of the upward trend section. Thus, this section may already be completed. If this is true, then the decline in quotes will continue from the current levels with targets located near the 29th figure and below. At the same time, the section that begins on September 23 may take on an even longer form. The wave “e” can become more complex and take a pronounced five-wave form.

The pound sterling made an unsuccessful attempt to break through the 23.6% Fibonacci level and retains the opportunity to complicate the upward section of the trend, which already looks quite complete. Markets are still waiting for information from Brussels on the progress of the negotiations. However, the negotiation was paused after one of the participants tested positive for COVID-19 and it is not yet clear when they will resume again.

Meanwhile, Donald Trump sends batches of lawsuits to the courts of those states where he lost the election. And the second important state after Pennsylvania where the Trump team wants to get the vote reversed is Michigan. In this state, a federal court declined to review the results, but Trump now wants to influence the electors themselves through senior Republican lawmakers. Donald Trump has already invited Michigan Republican Speaker Lee Chatfield and Michigan Senate Majority Leader Michael Shirkey to the White House.

Trump is expected to try to influence results in the state with the help of senior Republicans and seek to reverse the results. However, even if all the electoral votes in Pennsylvania and Michigan were taken from Biden and given to Trump, all the same, this will not be enough for the latter to win. But maybe Trump is going to act in the same way in one or more states? We continue to monitor the development of the situation. The US dollar continues to enjoy low demand in the foreign exchange market.

The Pound-Dollar instrument resumed building an upward trend, but its last wave could have already ended. Thus, now I recommend looking closely at the sales of the instrument for each “downward” signal of the MACD indicator. A new successful attempt to break through the 23.6% Fibonacci level will indirectly indicate that the instrument is ready for a decline with targets located near the calculated levels of 1.3010 and 1.2864, which corresponds to 38.2% and 50.0% for Fibonacci. I recommend waiting for it before opening sales of the pair. A successful attempt to break through the peak of the wave “e” will lead to more complex wave markings.