A normal entry point did not appear yesterday afternoon, short deals could be observed during the European session. News that one of the negotiators on the Brexit trade deal had contracted the coronavirus forced the rest of the market to suspend the meeting and postpone it indefinitely. However, this did not generate any market reaction, as there is still hope that the agreement will be signed at the last moment. 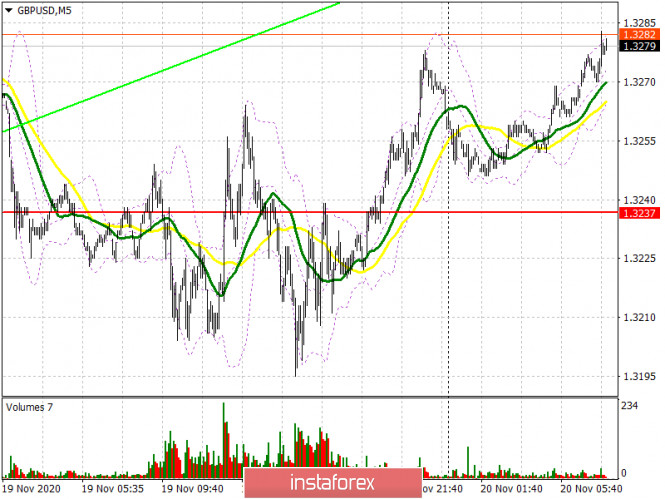 Traders will focus on the 1.3237 level. The pound will continue to rise as long as trading is conducted above this range. In case the pair falls to this level in the first half of the day, a false breakout there will be a signal to open long positions in hopes to return to the resistance area of 1.3310, which is where the pair fell a few days ago. Getting the pair to settle above 1.3310 will lead to a more powerful bullish momentum, in anticipation of renewing highs of 1.3378 and 1.3476, which is where I recommend taking profits. However, such a scenario will only be possible if we receive very good data on retail sales in the UK, which is set to be released this morning. In case there is not much activity in the support area of 1.3237, it is best not to rush to buy, but to wait until a larger low at 1.3168 has been updated, from where you can open long positions for a rebound during the first test of this range, counting on a correction of 20-25 points.

So far the bears have taken a wait-and-see attitude and the main focus is currently on returning support at 1.3237. Sellers’ behavior at this level will determine the pair’s succeeding direction. If buyers are not active, then being able to settle and test 1.3237 from the bottom up (similar to yesterday’s sale, which I analyzed in detail in my review of the US session) will be the first signal to open short positions in the pound, in hopes of falling to support 1.3168, which is now the middle of the horizontal channel. We can say that the bears have taken the market under their control only when they have settled below the 1.3168 level, which will quickly push the pound to the lower border of this channel at 1.3106, where I recommend taking profits. In case bears are not active, it is best to postpone short positions until the test of the monthly high of 1.3310, or sell the pound immediately upon a rebound from resistance 1.3378, counting on a correction of 20-30 points within the day. 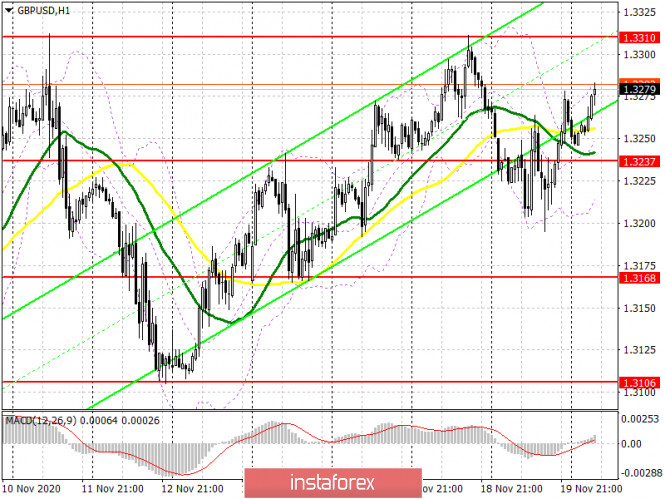 Trading is carried out above 30 and 50 moving averages, which indicates the likelihood of the pound’s succeeding growth.

A breakout of the upper border of the indicator around 1.3290 will lead to a new wave of growth for the pound. In case the pair falls, support will be provided by the lower border at 1.3200.

Overview of the GBP/USD pair. November 26. Nothing can replace the $ 900 billion agreement with the European Union. The British

Overview of the EUR/USD pair. November 26. Markets have finally lost their bearings. The European and American economies

Forecast and trading signals for GBP/USD on November 26. COT report. Analysis of Wednesday. Recommendations for Thursday