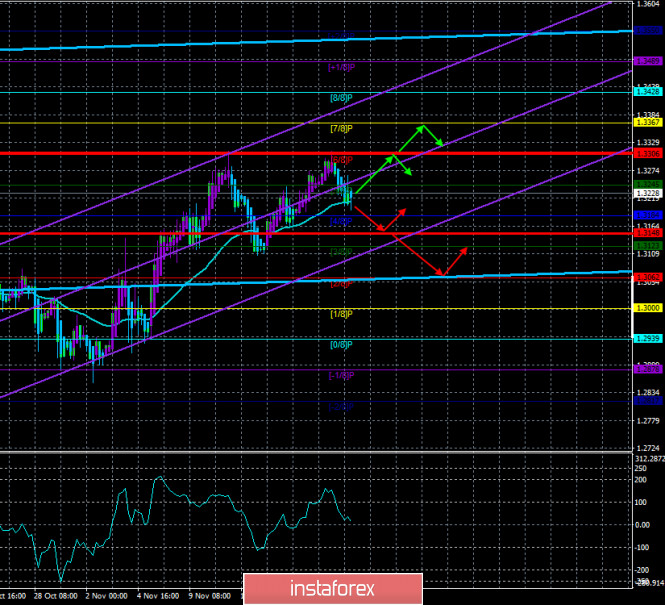 The British pound sterling against the US dollar also traded lower for most of the past day. However, the upward trend was still maintained, as the price continued to be located above the moving average line. However, for the British pound, it will not be surprising for the price to consolidate below the moving average with the subsequent resumption of the upward trend, as it has been more than once in recent weeks and months. However, one extremely important fact we still need to note: the pound/dollar pair twice worked out the Murray level of “6/8”-1.3306 and bounced off it twice. Thus, it adds probability to the possible end of the upward trend. Recall that we have long questioned the validity of the growth of the British currency. From our point of view, the British currency should be in decline against the dollar, however, the market is ruled by traders, not news or fundamental background. Therefore, as long as market participants continue to buy the pound or sell the dollar, the upward trend continues.

However, no positive information is still being received from Brussels. Moreover, today, it became known that the negotiations were interrupted for a short period because one of the participants was diagnosed with COVID. Michel Barnier wrote about this on Twitter. He stated: “One of the negotiators on my team tested positive for COVID-2019. Together with David Frost, we decided to suspend negotiations for a short period. The teams will continue to work in compliance with all medical recommendations.” However, the problem can now be much more serious than a break for a couple of days. First, it is unclear which of the negotiating teams has been infected yet. If Michel Barnier or David Frost are infected, the negotiations will have to be postponed indefinitely. But time is now the most important factor in negotiations. It is time that London and Brussels do not have at their disposal. Today is already November 20, and the negotiations were supposed to be completed by November 15 at the most, but it is already clear that they will continue next week (if they resume at all in the near future). So both groups can send a fervent greeting to Boris Johnson, who in the most difficult times for the whole world refused to extend the terms of the “transition period” to have more time to agree.

However, we can not say that the British currency began to fall in price on this sad news. As we said above, the pair only slightly corrected within the upward trend but failed to even overcome the moving average. This means that traders continue to believe in a miracle. I believe that the UK and the European Union will still be able to conclude a trade agreement. It is difficult to say how real these expectations are. We remind you that over the past four years, the lion’s share of all periods when the pound showed growth fell on expectations, hopes, and rumors. That is, the pound in most cases grew when there were no fundamental reasons for this. Perhaps something similar is happening now. After all, we have repeatedly listed a whole list of factors with which the pound simply can not feel good. Yes, America is also far from all right. And the possible actions of Donald Trump in his remaining two months (we talked about them in the article on EUR/USD) can put strong pressure on the US currency. Plus, even without these actions, the United States is now full of problems, ranging from political to epidemiological. However, they are not as pronounced as in Britain. After all, in the Foggy Albion, not everything is in order with politics and with the epidemic. Boris Johnson has long been criticized by both Parliament and the British. In Parliament, it is opposed by opposition forces, in the country – by the residents of Great Britain themselves. The British are opposed to a strict quarantine (unjustified), blame the government for the high levels of morbidity and mortality from COVID-2019 (justified), and believe that the government should not allow the absence of a trade agreement with the EU. As for the pandemic, despite all the measures taken by Boris Johnson, for whom the economy is more important, the number of cases of infection continues to increase and is already on average 25-30 thousand cases per day. And Britain is in third place in Europe for the total number of infections – 1.4 million. Only France and Spain have more. Thus, the pound has no fundamental support from either the United States or Britain.

That is why we continue to believe that the upward movement should stop in the near future. This is supported by a fairly large number of technical factors. For example, the pair has twice worked out the 76.4% Fibonacci level on the daily timeframe. The grid is based on the last round of the fall and not overcoming the important enough level of 76.4% casts doubt on the possibility of further growth of the pair. Also, the pound has been getting more expensive for 8 months. Corrections during this period, of course, happened, but it’s time for the upward trend to end. However, in any case, the first thing to do is to wait for the next price consolidation below the moving average line. And only after that, you can again count on a certain downward movement. 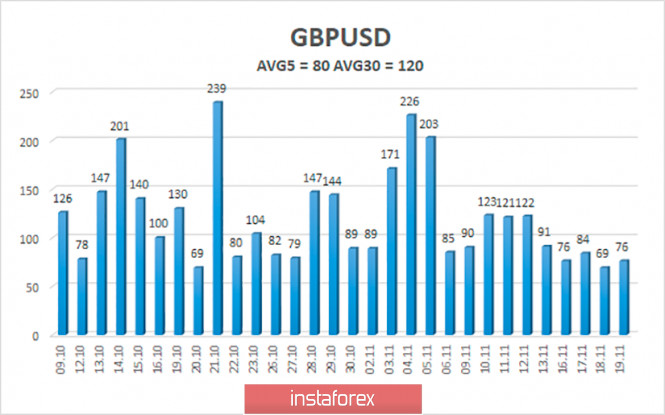 The average volatility of the GBP/USD pair is currently 80 points per day. For the pound/dollar pair, this value is “average”. On Friday, November 20, therefore, we expect movement inside the channel, limited by the levels of 1.3148 and 1.3306. The reversal of the Heiken Ashi indicator to the top signals the resumption of the upward movement.

The GBP/USD pair has started to adjust on the 4-hour timeframe. Thus, today it is recommended to open new long positions with targets of 1.3306 and 1.3367 in the event of a price rebound from the moving average line. It is recommended to trade the pair down with targets of 1.3148, 1.3123, and 1.3062 if the price is fixed below the moving average line.