NZDUSD is making a new higher high today at 0.6947 but the RSI does not follow. The RSI is still lower than the previous high and this provides us for the second bearish divergence. Price has broken below the bullish channel and is now back testing the channel from below. 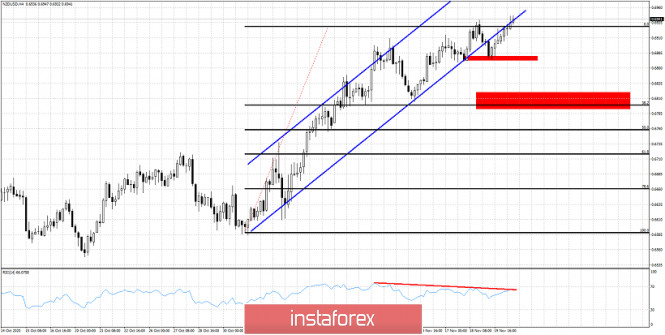 NZDUSD tested the first red rectangle support area at 0.6875 and bounced off of it. Support was respected. As we explained in our last post, breaking below this support level will be the first sell signal. We expect one to come as the bearish divergence suggests. Until then bears need to be cautious as price continues to make higher highs. We do not prefer to be bullish in the short-term. We prefer to be bearish and look to sell specially if support fails to hold. First target is the 0.68 level.

Technical analysis of EUR/USD for November 30, 2020

Trading idea for the NZD/CAD pair