The three largest Japanese banks, part of a group of 30 private sector entities, are to collaborate on the digital yen experiment. According to the media report, the group consists of banks, various Japanese brokerage houses, utilities and telecommunications companies, and retailers.

For the purposes of the experiment, private banks will be responsible for the currency issue, although the prospect of involving other third parties in the issue has not been ruled out, says the president of the new group, Hiromi Yamaoka. Yamaoka is a former director of the Japanese central bank, who has spoken more and more about the development of the digital yen in recent months.

Japan is well known for its slow acceptance of cashless payments. Cash still accounts for about 80% of total domestic settlement, compared to 55% in the US and just 30% in China.

The ETH/USD pair is in the up trend and there is no indication of any kind of reversal yet. The nearest technical resistance is seen at the level of $493.30. If the price will break out above this level, then the nearest target is seen at the level of $500. The strong and positive momentum support the short-term outlook for ETH. Only if a daily candle closes below $400 level, then the bears will have full control of the market and might push the prices deeper below this level.

The up trend on the Ethereum continues and the next long term target for ETH/USD is seen at the level of $500, so any correction or local pull-back should be used to open the buy orders. This scenario is valid as long as the level of $360 is broken. 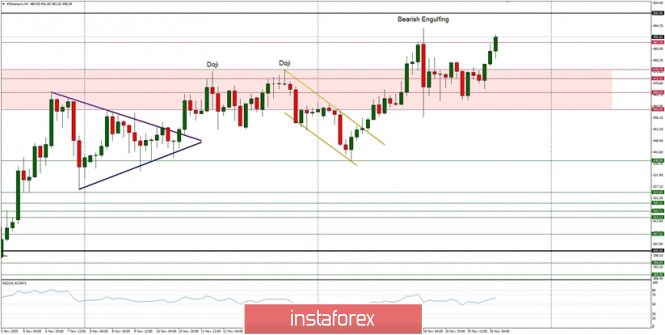