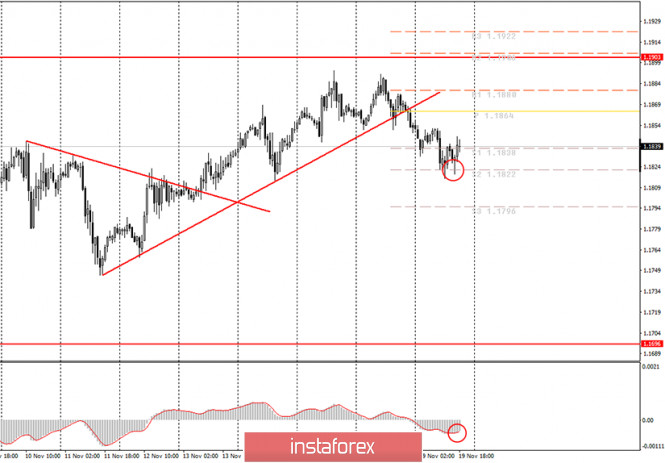 The EUR/USD pair fell and reached the support level of 1.1822 twice on Thursday, which we mentioned was the target. In the morning review, we advised beginners to trade down and even take a little risk, moving Stop Loss to breakeven and not paying attention to a possible reversal of the MACD indicator to the upside. We turned out to be right, and traders, as a result, could earn 15-20 points more than if they closed short positions on the MACD reversal to the upside. Now a round of corrective movement may begin, afterwards we can expect the downward trend to return within the horizontal channel. Yes, the euro /dollar pair still remains within the 1.1700-1.1900 horizontal channel, and not breaking its upper border and settling below the upward trend line speaks in favor of the fact that the trend has changed to a downward trend. So now the pair has good prospects to fall to the lower line of the horizontal channel. We remind you that in order to be able to open new short positions, it is better to wait for the MACD indicator to discharge to the zero level.

Not a single macroeconomic report released in the European Union on Thursday. European Central Bank President Christine Lagarde called on the European Commission to resolve all differences as soon as possible and to adopt the budget for 2021-2027 and the Recovery Fund. We have already said that Poland and Hungary vetoed the adoption of these bills due to some disagreements regarding EU legislation, which allows you to cut off the funding of these states. According to Lagarde, the economic recovery plan should start working immediately, without delay. Lagarde noted that the EU economy will obviously suffer from the second wave of infections and repeated hard quarantines and has clear downside risks in the long term. Therefore, the European economy may need additional incentives in the future. This information could have put moderate pressure on the euro currency.

No major events or publications scheduled in the European Union and the United States for Friday. Therefore, the pair’s volatility may remain low on the last trading day of the week, as well as throughout the week. Of course, it is possible that we might receive information that was not planned. However, for obvious reasons, it is impossible to predict its nature and possible impact on the foreign exchange market.

1) Long positions are no longer relevant, since the price has settled below the upward trend line, therefore, the trend has changed to a downward trend. So now you can return to buying the euro but first the current downward trend must end. Under the current conditions, the only option is to overcome the 1.1903 level, which will mean the pair will leave the horizontal channel of 1.1700-1.1900.

2) Trading for a fall at this time is relevant, since the trend has changed to a downward one. At the moment, an upward correction has begun, you must wait for it to end in order to be able to open new short positions with targets at 1.1822 and 1.1796. Most likely, the correction will end no earlier than Friday morning, so a new assessment of the situation can be carried out by then. The main thing is that the MACD indicator can and has time to discharge to the zero level.