Yesterday’s sales from 1.3310 brought quite good profit. In yesterday’s forecast, I drew attention to the 1.3310 area and advised you to open short positions from it. If you look at the 5-minute chart, you will see how the buyers failed to break the 1.3310 level, and the bears took advantage of this and formed a false breakout, which then caused an excellent entry point for short positions to appear. 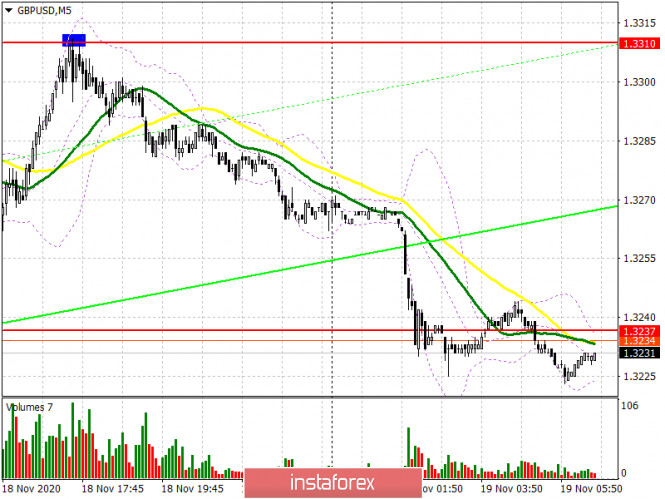 Traders will focus on 1.3237, since the pair’s succeeding direction depends on who takes control over it. Buyers need to gain a foothold above 1.3237 and test it from top to bottom, which will produce a convenient entry point to long positions in hopes for the pair to return to the resistance area of 1.3310, which is where the pair mainly fell yesterday. Settling above 1.3310 will lead to a more powerful bullish momentum, in anticipation of updating the highs 1.3378 and 1.3476, which is also where I recommend taking profits. However, such a scenario will only be possible if we receive progress on Brexit talks. In case GBP/USD falls further, it is best not to rush into buy positions, but to wait for the update of a large low at 1.3168, from where you can open long positions on a rebound during the first test of this range, counting on a correction of 20-25 points. In case bulls are not active in this area, I recommend buying the pound only at a larger local low of 1.3106.

The bears have taken a wait-and-see attitude and the main focus is now on protecting resistance at 1.3237. Sellers’ behavior at this level will determine the pair’s succeeding direction. If buyers are not active, then forming a false breakout in the 1.3237 area will be the first signal to open short positions in the pound, counting on it to fall to support 1.3168, which is now the middle of the horizontal channel. We can only say that the bears have taken control of the market when they have settled below the 1.3168 level, which will quickly pull down the pound to the lower border of this channel at 1.3106, where I recommend taking profits. We can speak of a breakthrough of this range only if we receive news of another failed negotiations on a trade agreement, which will pull down the pound to the area of the lows of 1.3034 and 1.2976, where I recommend taking profit. In case bears are not active at 1.3237, it is best to postpone short positions until the test of the monthly high of 1.3310, or sell the pound immediately upon a rebound from resistance 1.3378, counting on a downward correction of 20-30 points within the day. 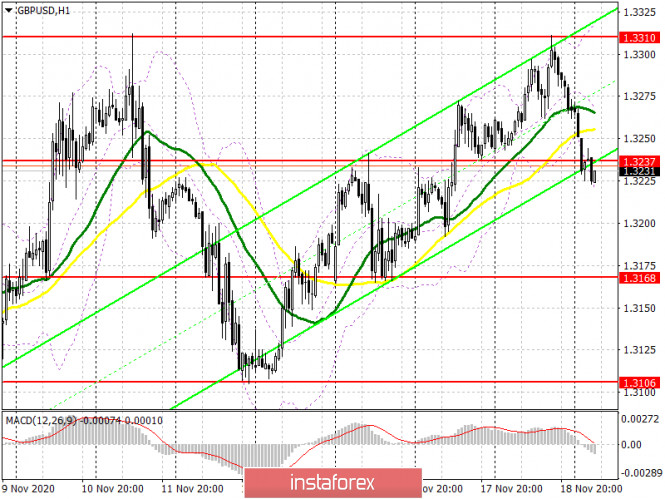 Trading is carried out below 30 and 50 moving averages, which indicates the likelihood of further downward correction of the pound.

Note: The period and prices of moving averages are considered by the author on the H1 hourly chart and differs from the general definition of classic daily moving averages on the D1 daily chart.