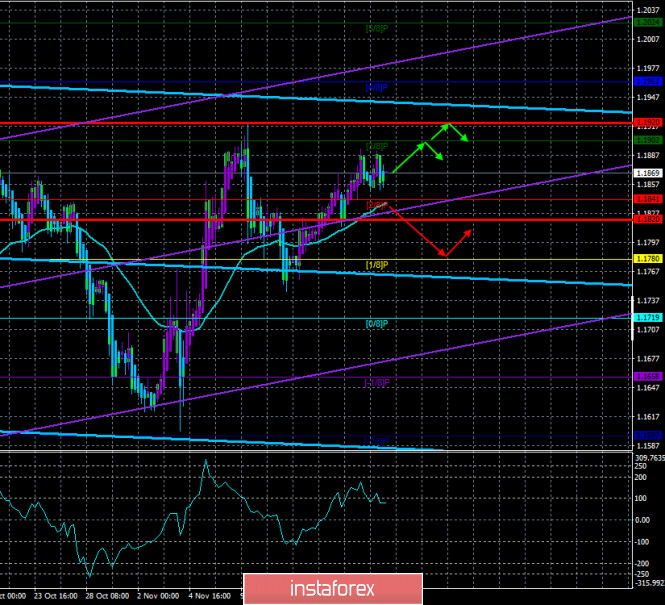 The third trading day of the week for the EUR/USD pair was again fairly calm. During the day, the euro/dollar pair attempted to continue moving up, however, the efforts of buyers were reduced to nothing. Thus, we can say that most of the day, the quotes generally stood still or traded in a very narrow side channel. The technical picture now suggests that the upward trend continues, as the price continues to be located above the moving average line. At the same time, traders once again failed to withdraw the pair from the side channel of 1.1700-1.1900. On the approach to the upper line of this channel, the bulls’ fuse began to dry up and so far everything looks as if a new round of downward movement will simply begin within the side channel. However, this is exactly the scenario we are waiting for. Traders still do not see any reason to continue serious purchases of the European currency, however, there are no reasons for serious purchases of the US currency now either.

If we try to understand the movement of the euro/dollar pair over the past three months from a fundamental point of view, we can conclude that market participants generally ignored all events during the specified period. The pair spent most of these three months between the levels of 1.1700 and 1.1900, so a long-term flat is on the face. A flat means that either no important news or events occurred during this time or all of them were ignored. In our humble opinion, there were so many events in 2020 that would have been enough for 5 ordinary years. And the last three months are no exception. What are the US elections and all the “near-election” events worth? Thus, there is a high probability that market participants simply ignore most of the news, events, and macroeconomic reports.

Even though the results of the US election are almost unambiguous and at this time no one doubts that Joe Biden won, Trump retains a theoretical chance of extending his term in the White House for another 4 years. We have already written in previous articles that everything is possible. So far, Trump and his team continue to challenge the election results in the states they lost. However, the results are not yet encouraging. Two states where the recount was carried out announced some inaccuracies, thanks to which Trump will get several thousand more votes than previously stated. However, even with these votes, the incumbent still lost in these states. So far, it is extremely difficult to understand what “2.7 million stolen votes” Trump was talking about?

However, a little later, the clowning began (or continued). Recall that a few days ago, we reported on the dismissal of the US Secretary of Defense, who previously refused to send the army to American cities to disperse demonstrators and protesters during the summer riots on racial grounds. Chris Krebs, Director of the US Cybersecurity Agency, was the next to leave, saying there was no evidence of election fraud. Chris Krebs didn’t see the fraud and Donald Trump did. Thus, Chris Krebs is fired. Here is simple logic. Earlier, the agency said that the past election was one of the safest in history. “Chris Krebs’ recent statement about the security of the 2020 election was highly inaccurate, as there were massive violations and fraud, ” Trump wrote on Twitter, as usual, without providing any proof of his words. To be honest, sometimes when we analyze news related to Trump, it seems that we are in a circus or some kind of humorous program. The President of the country with the largest economy in the world makes incompetent, false, and unconfirmed statements every day in the amount of at least 15 (these are statistics). At the same time, most of his statements look simply absurd and you don’t need to be a political scientist to see this absurdity. But at the same time, Trump continues to make such statements and it is unclear what he is counting on. By and large, Trump can now disperse half of the White House altogether. All those who did not obey him, contradicted, refuted his words, and generally did not hold the same opinion as to the President. The most striking example is Anthony Fauci, who from the very beginning warned of the greatest danger of the “coronavirus” for Americans, while Trump said that “the virus will disappear by itself” and “it is no worse than a cold or flu”. Fauci (like many other doctors and epidemiologists) refuted the President’s words, so he may also lose his position in the near future.

Well, Trump can continue to take revenge on all those who are guilty of his defeat in the election. And the main culprit, of course, is China. In fact, in the near future, Washington may impose new sanctions against Chinese officials, as well as new trade duties on imports from China. Reasons? You don’t need a reason. China does not want to make concessions and trade the way Washington wants, so sanctions. That’s the whole logic of the current White House. One thing is certain. We are waiting for a very fun last month and a half of 2020 and the last 10 weeks of Trump as President of America.

Well, the US currency, which had a hard time in the last 7-8 months, will have to endure further. Demand for the US dollar in the foreign exchange market is not high right now, as it is completely unclear what to expect from Trump in the next few weeks and months. Many experts fear that Trump will finally slam the door, so much so that the echo will be heard all over the world. Thus, we believe that the best scenario for the US currency for the next couple of months is a movement on the same side-channel of 1.17-1.19. If traders manage to move the pair above the 1.1900 level, the chances of forming a new upward trend (or resuming the old one) will increase significantly. 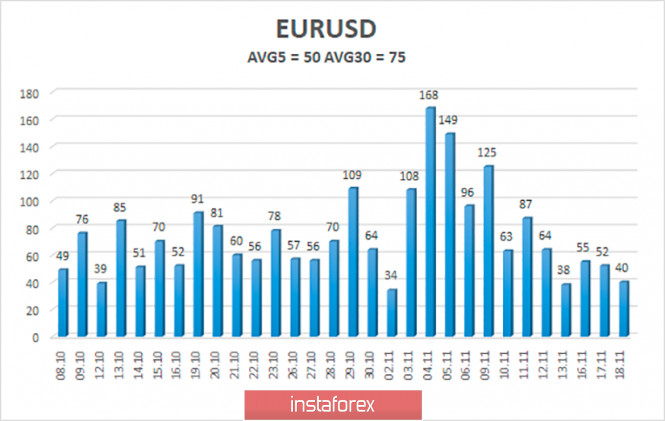 The volatility of the euro/dollar currency pair as of November 19 is 50 points and is characterized as “average”. Thus, we expect the pair to move today between the levels of 1.1820 and 1.1920. A reversal of the Heiken Ashi indicator upward may signal a new round of upward movement.