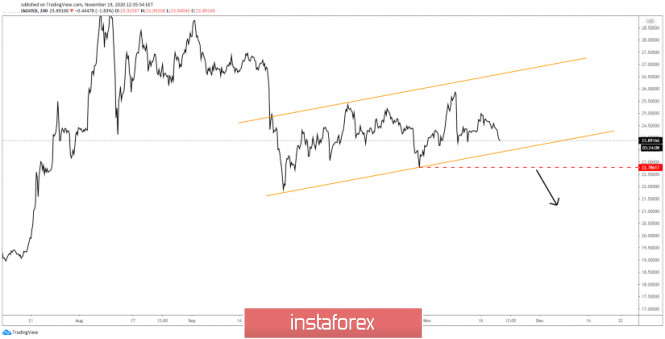 Silver is trading at the 23.889 level and it maintains its bullish bias as long it stays within the ascending channel. Unfortunately, the price has shown some oversold exhaustion signs after failing to reach and retest the channel’s upside line.

Now, the metal is about to reach the downside line which represents a support level, the demand could be high again at this line. So, only a breakdown from this channel could signal a deeper drop. Personally, I believe that XAG/USD could drop further if the Gold price declines in the upcoming period.

Don’t forget that the price could increase again anytime again as long it stays within the up channel’s body.

The price could violate the uptrend line, up channel’s support, but it could increase again. That’s why you should wait for a drop and stabilization under the 22.786 former low before selling. Such a drop will signal a deeper drop and will activate a selling opportunity.