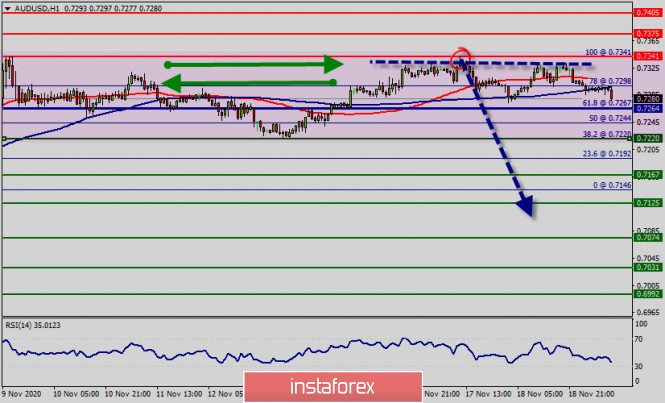 The AUD/USD pair extended its sideways consolidative price action through the early European session and remained confined in a narrow trading band just below the spot of 0.7341. Range 0.7341 – 0.7264.

In general, we will continue to suggest the bearish trend for the upcoming period conditioned by the price stability below 0.7341and 0.7300 levels, noting that the EMA100 supports the suggested bearish wave.

Again, the trend is still below the 100 EMA for that the bearish outlook remains the same as long as the 100 EMA is headed to the downside. Hence, the price area of 0.7341/0.7300 remains a significant resistance zone.

Consequently, there is a possibility that the AUD/USD pair will move downside. The structure of a fall does not look corrective.

Besides, the weekly support 1 is seen at the level of 0.7220. Equally important, the RSI is still calling for a strong bearish market. As a result, resell below the weekly pivot point of 0.7220 with targets at 0.7167 and 0.7125 in order to form a double bottom.

Nevertheless, stop loss should always be taken into account, accordingly, it will be of beneficial to set the stop loss above the last bullish wave at the level of 0.7375. Overall, we still prefer the bearish scenario.