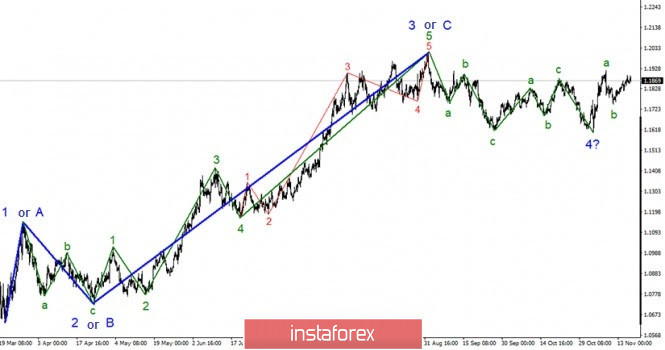 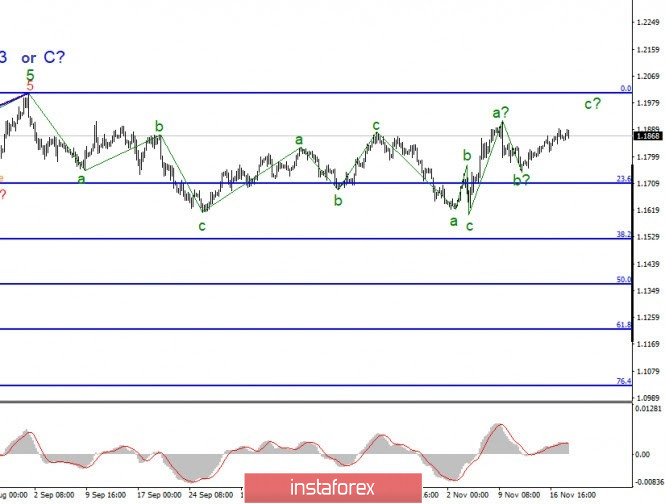 A smaller-scale wave marking also indicates the possible end of the downward section of the trend that begins on October 21. With the final decrease, the instrument could form a wave from the next three, so a new three can be built up, or the upward trend section within the global wave 5 will resume altogether, as I mentioned when analyzing the 24-hour timeframe. In any case, the current wave should lead to an increase in quotes above the peak of the previous wave a, that is, above the 19th figure.

The European currency continues to be in demand in the foreign exchange market, so the news background now remains clearly in favor of this particular currency. There has been quite a lot of news of various kinds and nature in recent days. For example, yesterday, quite unexpectedly, Poland and Hungary blocked the adoption of the seven-year EU budget for 1.1 trillion euros and the fund for economic recovery after the pandemic for 750 billion euros, considering that funds are not distributed fairly, and the EU authorities reserve the right to cut funding for states that do not respect the principles of democracy and the rule of law. Whether these charges apply in Poland and Hungary, it is impossible to say for sure, but these countries clearly do not want to be left without aid and without a budget in such difficult economic times. Therefore, they used the right of veto and now the budget and the fund are hanging in the air, because until all 27 EU member states approve them, they will not come into force. As you can see, this news, however, did not negatively affect the euro currency and demand for it. In any case, the budget and the fund should be distributed much later than November 2020, so there will still be plenty of time to agree with each other.

But in the US, the situation remains difficult. Epidemiological situation. There are more than 150,000 new cases of coronavirus in the country every day. People die, end up in hospitals. Doctors note that the virus is spreading freely and calmly in all states, cities, localities and among all segments of the population. It is not possible to curb the virus, although the authorities of some states have already tightened quarantine measures and introduced even partial “lockdowns”. However, this is clearly not enough to stop the geometric spread of the epidemic. Donald Trump, who is still the President of the country, still refuses to introduce a total “lockdown”. Thus, the US economy will not lose as much as during the spring lockdown, but it may still experience problems at the end of 2020.