The demand for protective assets is rising again after the temporary optimism about news of successful trials of COVID-19 vaccines, but negative factors are coming ahead. The number of cases is growing, forcing governments to take new restrictive measures. At the same time, macroeconomic indicators are declining, which has a low chance to recover in the current situation due to the new restrictions.

Last month, US retail sales increased by 0.3%. There was a price slowdown for both imports and exports, which indirectly indicates a declining demand.

The slowdown in retail sales, as well as the decline in inflation, looks logical if we closely monitor the fact that a number of related indicators clearly signal a slowdown in market activity, and financial conditions have worsened. 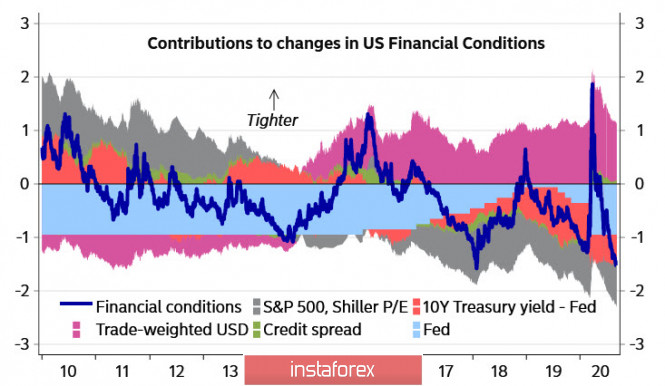 The logic of the situation clearly points to the need for new incentives, but this is where the main problem lies. Even if J. Biden is confirmed as the new US President, Republicans will retain control of the Senate, which means Mr. Biden will not be able to change the course of fiscal policy. Moreover, the Republicans will not let the Democrats take charge of the large-scale stimulus, and therefore, the scale of new incentives may not be enough in the end.

These are our main concerns right now. The demand for risk is declining and defensive assets are likely to be in favor today until Friday.

The net short position in the CAD was 1.638 billion last week. The weekly change of -64 million is minimal and without significant macroeconomic releases, the Canadian dollar have to follow the market, as it doesn’t currently have a strong driver to set the direction. 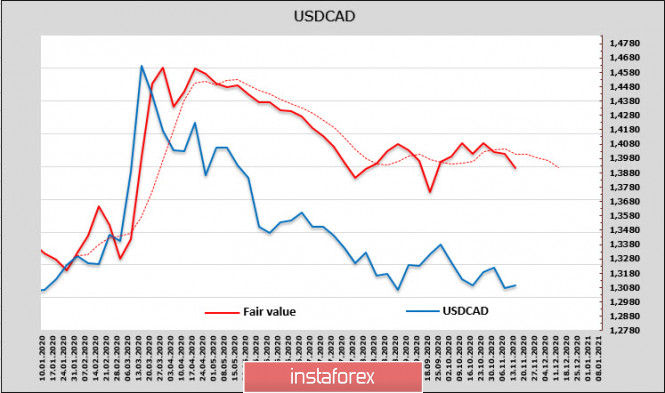 The support level of 1.2948 was already tested twice, which ended in failure. At the moment, the Canadian dollar is trading in a range, as it has no reason to leave it. The calculated price is clearly above the spot price, but it tends to decline. This is a factor in favor of the decline.

From a fundamental viewpoint, the Canadian economy has only one key vulnerability – the dependence of exports on the US demand growth. Their own indicators look more convincing – the labor market in Canada recovered significantly faster over the summer months than in the United States, which may reflect more effective measures in the fight against the pandemic. In any case, while we need to assume that the reasons for leaving the range are slightly more likely to move upside due to the growth of global risks, the trend begins to be traced more clearly from Tuesday.

During the past week, the net long position in the yen rose by 1.612 billion, reaching 4.973 billion. This is the maximum weekly growth among the G10 currencies, reflecting the change in the balance of risks towards their growth and the related growth in demand for protective assets.

The estimated fair price is significantly above the spot price, but below the bottom level of January-February 2020. The gap is still important and long-term investors see the dollar higher, but short-term factors continue to keep the high demand for the yen. 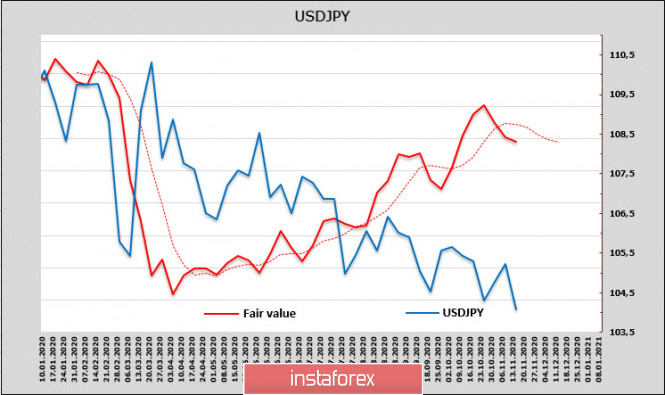 If it seemed that the risks were declining a week ago, and the Cabinet of Ministers of Japan was preparing to expand the money supply, which should have pushed the USD/JPY up in the end, then at the moment, changes in futures indicate that the demand for the yen is likely to remain high and it is too early to wait for an upward turn.

The main issue is whether the Cabinet of Ministers will decide on large-scale interventions in order to slow down yen’s growth. The domestic economic situation is deteriorating, despite the fact that GDP recovered in Q3. Imports also remain very low and the GDP deflator, which tracks prices for goods and services, is growing very weakly, that is, domestic demand remains dangerously low. Therefore, the main threat to Japan in recent decades, namely deflation, is getting stronger.

Technically, the USD/JPY pair is under bearish pressure, so a movement towards 103.15/30 is reasonable, but with each point down, the probability of intervention increases.