In yesterday’s afternoon forecast, I paid special attention to buy positions on the European currency after the breakdown and getting the pair to settle above the resistance of 1.1868. Which is exactly what happened. And even if you did not have time for the first wave of the movement, you certainly had to enter long positions after retesting this area from top to bottom. I have marked two entry points for buying the euro on the 5-minute chart. The second wave of growth was even stronger than the first, and was worth 25 points, but the bulls failed to build a more powerful upward momentum. 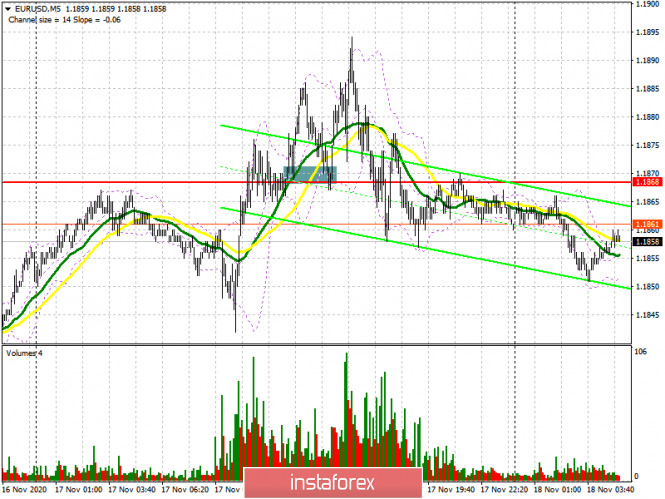 News that Poland and Hungary have blocked the EU budget for the next seven years, as well as the Stabilization Fund, caused the bullish momentum in the euro to decrease. Buyers currently need to form a false breakout at the 1.1844 level, since this will keep the pair bullish, which can return it to the resistance area of 1.1890. But do not forget that in order to maintain the trend, buyers need to update yesterday’s highs. I recommend opening long positions from 1.1890 only when the pair has settled above this range and afterwards, it should be tested on the reverse side, and also, today’s data on inflation in the eurozone should turn out to be much better than economists’ forecasts, which, unfortunately, will not happen. If the pair moves below the support of 1.1844 and bulls are not particularly active at this level, then the downward correction is likely to intensify. In this scenario, there is no need to rush with buy positions. It is best to wait until the 1.1802 low has been updated, or open long positions immediately on a rebound from the larger support 1.1749, counting on a correction of 20-25 points within the day.

The initial challenge for sellers is to reclaim the 1.1844 level, which they lost yesterday morning and then they were unable to recover even after we received a weak report on US retail sales, which turned out to be worse than economists’ forecasts. Getting the pair to settle below 1.1844 and testing it from the bottom up produces a more convenient entry point to short positions in hopes to bring back the downward trend. In this case, the nearest target of the bears will be the low of 1.1802. Updating this level will only be evidence that the upward trend has been broken and that the pair is stuck in a horizontal channel. A breakout and getting the pair to settle below this range will lead EUR/USD to the area of the lower border of the horizontal channel at 1.1749, where I recommend taking profits. However, this scenario can be achieved only in the event of a larger decrease in inflation in the euro area than economists expect. If the bulls turn out to be stronger and continue to push the pair up after the eurozone data has been published, then it is best not to rush to sell, but wait until yesterday’s resistance at 1.1890 has been updated, where forming a false breakout will be a signal to open short positions in the euro. I recommend selling EUR/USD immediately on a rebound but only from the monthly high of 1.1929, counting on a correction of 15-20 points within the day. 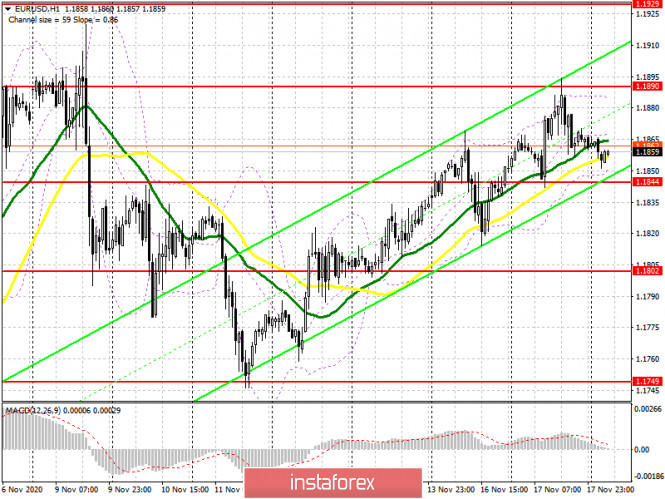 The Commitment of Traders (COT) report for November 10 showed a reduction in long and short positions. Euro bulls are holding on to a wait-and-see attitude and are in no hurry to return to the market even after the US presidential elections. Despite this, buyers of risky assets believe that the bull market will continue, although they prefer to proceed with caution. Thus, long non-commercial positions decreased from 208,237 to 202,374, while short non-commercial positions remained practically unchanged, falling from 67,888 to 67,087. The total non-commercial net position decreased to 135,287 against 140,349 a week earlier. It is worth noting that the delta has been declining for seven consecutive weeks, which confirms the buyers’ lack of desire to enter the market in the current conditions. Growth will only begin after Joe Biden’s victory as he intends to endow the American economy with the next largest monetary aid package worth more than $2 trillion.

Trading is carried out in the area of 30 and 50 moving averages, which indicates uncertainty with a further direction.