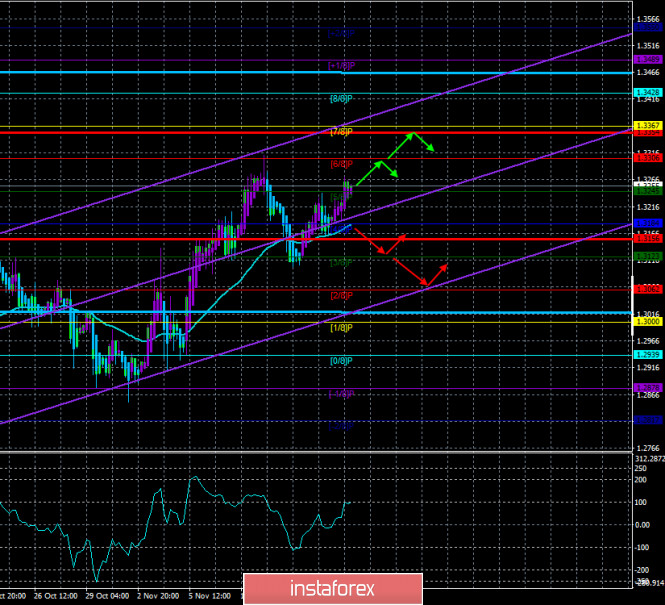 The British pound sterling in pair with the US dollar continued to rise in price for most of Tuesday, November 17. After another unsuccessful attempt to start a downward movement (fixing the price below the moving average), the quotes again resumed moving north. Despite the difficult fundamental background for the British currency. However, we have repeatedly talked about a very strange strengthening of the British currency. From our point of view, it is completely unfounded, and the pound sterling is overbought. For a while, the pound could get more expensive due to the “four types of crisis” in America (summer months and September), but then the situation stabilized a little and now only the epidemiological crisis causes serious concerns. Nevertheless, it is the pound that continues to grow although the UK also has a very difficult situation with the “coronavirus”, with the economy, and with Brexit. However, as we have also repeatedly stated, any fundamental theory must find technical confirmation. There are no confirmations, so the pair is continuing its upward movement.

The UK has its saga. If in the States it is “elections and Donald Trump”, in Britain it is “Brexit and trade negotiations”. Unfortunately, to date, it is still unclear at what stage the negotiations between the groups of Michel Barnier and David Frost are at, what is the progress? From time to time, there are reports in the media from circles close to the negotiating groups or the government, but all these reports are different and often contradict each other. For example, only in the last few days, the media reported that David Frost had informed Boris Johnson of a possible agreement next week. That there are still serious disagreements about fishing and fair competition. The fact that the UK is still not afraid to leave the European Union without any agreements. Some media outlets report a “stalemate” on the issue of fishing. Some talk about overall progress in the negotiations. Perhaps this is the reason for the growth of the British currency. Remember, how many times the pound sterling (since 2016) has grown when there were no reasons for this? How many times did it grow up solely on rumors, expectations, and hopes? This is probably the case right now. Perhaps market participants (primarily major players) believe that the deal will eventually be agreed upon, and this is why the British currency is strengthening. Thus, despite the appearance of a failed fundamental background, as we can see, there are reasons why the pound may well show growth. Another thing is that if officials eventually announce a failure in the negotiations, the pound may collapse down by 500-600 points, if not more. And this may happen in the next few days, maximum – weeks. As early as this week, an EU summit will be held, during which issues related to the UK, Brexit, and deal negotiations are to be discussed. We remind traders that the European Union is also studying the possibility of legal proceedings with London over the “Johnson bill”, which has not yet been adopted but may be adopted in the future even though the House of Lords rejected it. In general, despite the growth of the British currency, we still believe that at any moment this currency can fall like a stone.

Meanwhile, not all US political analysts are sure that the election is over and Donald Trump has finished the fight for the presidency. Experts from the Harvard University School of Economics conducted a study that identified 285 different scenarios, following which Donald Trump may try to stay in power. The main reasons for Trump’s irrepressible desire to remain President, experts call the deprivation of immunity and a huge number of lawsuits against him and his business empire. While Trump is President, lawsuits are not considered or are considered “through the fingers”, and Trump himself is inviolable. Trump loses the post – and all claims to him will no longer be claimed by the US President, but claims to an ordinary US citizen. As a result, the school’s researchers even identified a clear strategy for Trump’s actions, which began to be implemented several months ago, long before the election. First, Trump began to form a negative attitude towards the Democrats in advance, regularly stating that they would try to rig the election with the help of “postal voting”. Secondly, Trump started talking about the so-called “red gap” in advance: Trump first pulled ahead, and then quickly lost his advantage due to ballots that came in the mail (that is, later), in which the majority of votes is given to Biden (but this was known before the election). Thus, this effect Trump from the very beginning tried to pass off as a scam, saying that the Democrats through this scheme can wind up any number of votes since they will know how many votes Trump has. Third, Trump tried his best to find violations in the voting and counting in every state in which he lost. Whether it’s a broken counting machine, not allowing representatives of the Republican Party to the precinct or a glitch in the software that is responsible for counting votes. Fourth, the dismissal of Mark Esper as Secretary of Defense, whom Trump could not rely on because of the latter’s public refusal to use military force to disperse demonstrators during rallies and racially motivated protests over the summer. Fifth, the appointment of “his” judge to the US Supreme Court in case the case goes to the Supreme Court. Sixth, Trump, through lawsuits in civil courts, achieves the maximum delay in the announcement of the official and final election results. Seventh, Trump will try to recognize elections in a particular state as invalid, in which case the electoral college will be appointed by the state authorities, not by the voters. And if these authorities are Republicans, then they will appoint Republicans. Thus, despite the apparent unambiguity of Trump’s defeat, indeed, everything may still be incomplete, and the remaining six weeks of a crazy 2020 may still present surprises.

For the US dollar, all this political chaos is a negative factor. We have already said that market participants are afraid of uncertainty, so the longer Trump keeps the chances of a “coup”, the longer the dollar remains under pressure. Another thing is that in the UK, the situation is such that it is extremely difficult for the pound to find reasons for growth. However, both currencies cannot become cheaper at the same time. 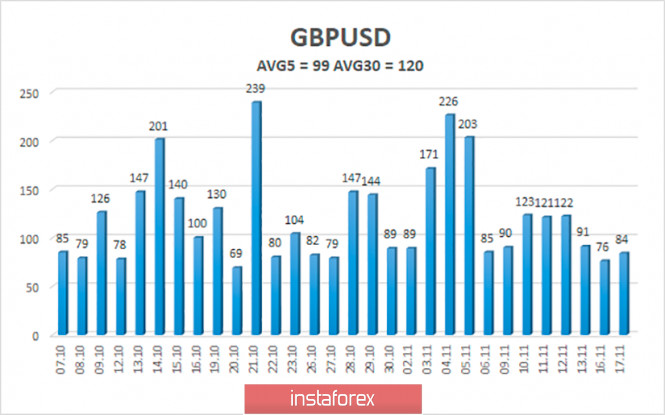 The average volatility of the GBP/USD pair is currently 99 points per day. For the pound/dollar pair, this value is “average”. On Wednesday, November 18, therefore, we expect movement inside the channel, limited by the levels of 1.3156 and 1.3354. The reversal of the Heiken Ashi indicator downwards signals a new round of corrective movement.