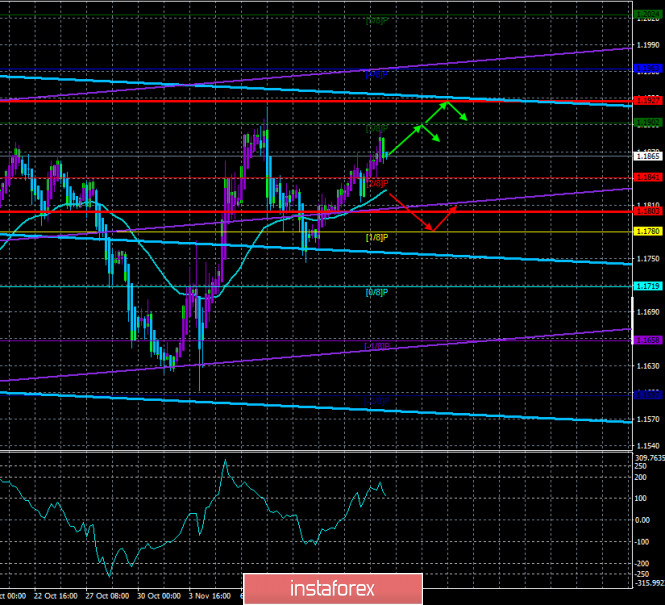 The second trading day of the week for the EUR/USD pair was again fairly calm. During the day, the euro/dollar pair continued its upward movement within the side channel of 1.1700-1.1900, which we have already mentioned more than once. By and large, the technical picture does not change at all, and quotes continue to move to the upper line of the specified channel. Thus, a downward reversal may occur near the level of 1.1900, which may be the beginning of a new round of downward movement with the goal of 1.1700. In the long term, the absolute flat has been maintained for three months. The US currency is still not in demand among traders, however, the fall against the euro does not continue. We still expect that the previous local high near the 1.2000 level will remain the peak of the entire upward trend. However, as we have already said, any fundamental theory must be supported by technical factors and signals. There are no 100% forecasts in the foreign exchange market.

Hungarian-Polish veto. Yesterday, the media literally stirred up around the unexpected news about the blocking of the EU budget for 2021-2027 by Hungary and Poland. In addition to the seven-year budget, Hungarians and Poles blocked the 750 billion euro recovery fund after the pandemic. The reason is the EU’s refusal to change the principles of allocating funds from the budget and the recovery fund. At the moment, the following rules apply: if a violation of the principles of democracy, freedom of the press and independent justice is observed in any of the EU countries, then funding from the common European “cauldron” may stop until the authorities of the violators resolve the situation. Poland and Hungary have repeatedly been suspected of violating these principles, so they may well lose payments from the EU budget. At the same time, any EU member state can veto any bill and any important decision. This was used by Hungary and Poland. Thus, negotiations will now have to start with representatives of these countries to change their decision, otherwise the budget will not be adopted, as well as the fund. And if they are not accepted, then the money will not flow to the countries. EU officials have already criticized the actions of the Polish and Hungarian authorities, calling their actions reckless and short-sighted. According to politicians, many European companies are on the verge of bankruptcy and are waiting for this money. However, this problem is small for the European Union and the euro currency. It is obvious to everyone that sooner or later the parties will agree and the budget and the fund will be adopted and ratified. It is only a matter of time and small concessions on each side. All the same, the budget for 2021-2027 and the recovery fund will have to start distributing no earlier than March next year. That is, there is still plenty of time. And it is also not profitable for Hungary and Poland to block these two bills forever, since they will also not receive a single euro from these sources. Thus, this problem is likely to be resolved in the near future. Moreover, the next EU summit will be held this Thursday. Well, the euro did not react to this news and calmly continued to rise in price.

In the United States, the main problem remains “coronavirus”. The topic of elections, which has stirred the minds of all market participants in recent months, has finally faded into the background and is no longer of particular interest. By and large, the election can already be considered history, since Trump did not take any real steps to change the results of the vote. Therefore, there will be no revision of the results. Joe Biden won by a wide margin, so suing Trump doesn’t make any sense. Only time will be lost. And he doesn’t have much time left. However, the American President has already set out to conduct them “usefully” and escalate the trade war with China, which in recent months has been frankly put on pause. Both Washington and Beijing simply waited, waiting for who would be elected President. After all, future negotiations and future relations between the countries depended on this. Now that China has got the President it wanted, the chances of a softening of US-China relations have increased dramatically. However, Trump either really intends to run for President in 2024, or just finally wants to punish his main culprit for losing the election, where he is going to introduce a number of sanctions measures and new duties against Chinese officials and on Chinese goods. In the first case, the President can prepare a springboard for his presidency in 2024-2028, in the second – he is just going to take revenge on Beijing. But the current US President does not care about the “coronavirus”. He didn’t care from the start. And after losing the election, he doesn’t care twice. It’s a good thing that every state in America has the right to set quarantine restrictions themselves. Trump stopped commenting on COVID-2019 a few weeks ago (and maybe even months), because each of his new statements further lowered his political ratings. But Joe Biden believes the virus is still very dangerous. And this is noticeable without Biden’s words. The Democrat who won the presidential race said that Donald Trump’s refusal to recognize the election results and transfer power to him could lead to an increase in the number of victims from the “coronavirus”. The Office of General Services, which is supposed to begin the process of transferring power, did not recognize Biden as the new President. Accordingly, the procedure has not started, and Biden does not have access to government reports that are needed to plan a strategy to combat COVID-2019 in the future. “We are talking about saving lives, this is not an exaggeration. If we don’t coordinate our actions, more people may die,” Biden said.

From a technical point of view, the euro/dollar pair still continues to maintain an upward trend. Traders will be able to count on a stronger growth than to the level of 1.1900 if they confidently overcome this level. In this case, the quotes leave the side channel. However, we remind traders that the side channel is not perfect and the price has briefly left it several times over the past three months. Accordingly, even overcoming its upper line does not guarantee the resumption of the upward trend. 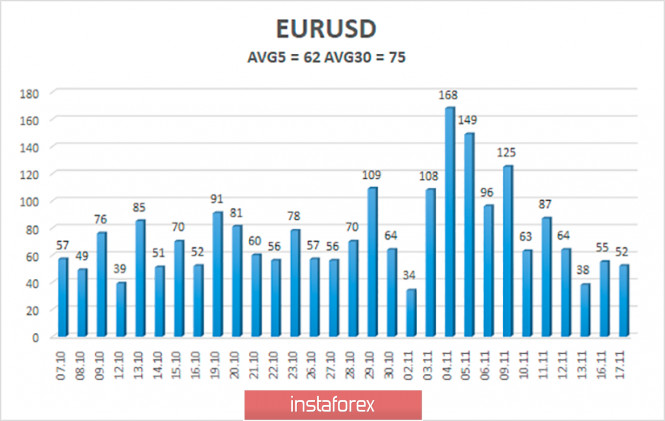 The volatility of the euro/dollar currency pair as of November 18 is 62 points and is characterized as “average”. Thus, we expect the pair to move today between the levels of 1.1803 and 1.1927. A downward reversal of the Heiken Ashi indicator may signal a new round of downward correction within the framework of a continuing upward trend.

The EUR/USD pair has started a new round of correction, but remains above the moving average. Thus, today it is recommended to open new long positions with targets of 1.1902 and 1.1927, if the Heiken ASHI indicator turns up. It is recommended to consider sell orders if the pair is fixed below the moving average with the first targets of 1.1803 and 1.1780.