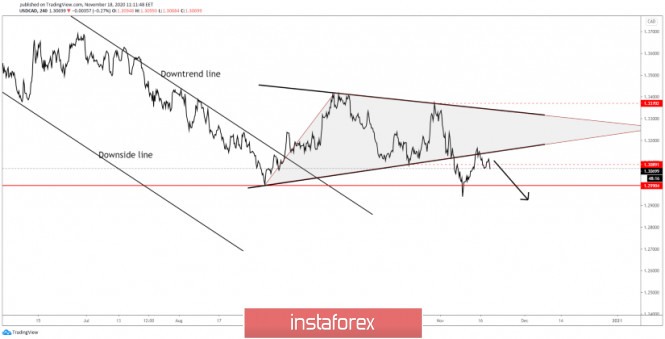 USD/CAD has registered a temporary increase, it has come back to retest the triangle’s downside line and now it could drop deeper again. If you remember, USD/CAD was expected to drop if it makes a downside breakout from the symmetrical triangle, chart pattern.

So, technically, the bearish (downside) scenario is intact. Practically, USD/CAD was expected to drop towards 1.2700 psychological level after escaping from the triangle pattern.

USD/CAD could drop at least till the 1.2990 static support. Only another breakdown under this downside obstacle followed by a retest, or by a drop under the former peak low suggests selling with downside targets at 1.28 and 1.27 levels.

The downside scenario could be invalidated if USD/CAD increases and jumps above 1.3172 former high.