Positive news about COVID-19 vaccines has breathed new life into financial markets. The S&P 500 is not tired of setting records, and oil soared to the highest levels since the beginning of September. The world is dreaming of a return to the old life, but Fed officials, including Jerome Powell, warned that the next few months would be tough for the US and global economy. The ECB says it is too early to assess the impact of vaccines on the recovery of global GDP, and the International Energy Agency (IEA) advises not to rush into hopes of a return to the old days. The market, as usual, seems to be running ahead of itself and can go into a pullback at any time if something goes wrong as originally expected.

The IEA predicts that global demand for black gold in 2020 will decrease not by 8.4 million b/d, as expected in October, but by 8.8 million b/d to 91.3 million b/d due to the ongoing growth of coronavirus infections in Europe and the United States and related government restrictions. In 2021, the indicator will grow by 5.8 million b/d to 97.1 million b/d mainly due to China and India, however, demand will remain 3 million b/d below pre-crisis levels.

The spread of COVID-19 across Europe: 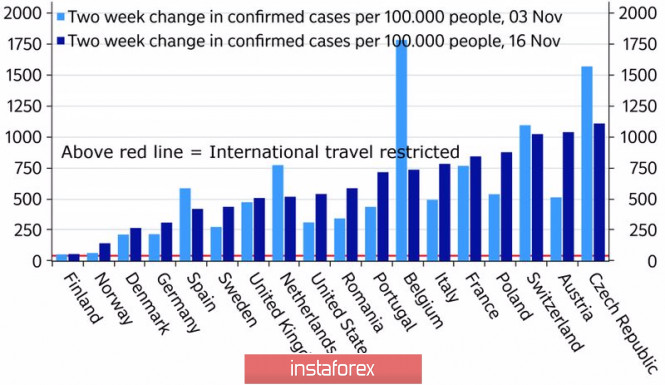 Optimism in relation to the global interest in the black gold and OPEC is gradually fading away. According to the cartel’s forecasts, it will increase next year not by 6.5 million b/d, as previously expected, but by 6.2 million b/d. However, investors saw a positive in the estimates of the authoritative organization: if OPEC worsens forecasts, it is likely that the cartel’s Alliance with Russia will not follow its plan to reduce the volume of oil production cuts from 7.7 million b/d to 5.7 million b/d from the beginning of January. Additional barrels from the supply side would seriously complicate the life of the Brent and WTI bulls.

In the meantime, the black gold market is looking to the future with enthusiasm. The 3-month spread on North Sea futures contracts narrowed from $1.42 in early November to $0.56 per barrel, indicating that investors’ concerns about an oversupply of oil in the market over the next quarter have eased. Brent and WTI bulls have certain headaches due to the increase in Libya’s production which exceeded 1 million b/d, but can this be compared with the hopes of saving the global economy from a pandemic with the help of vaccines?

The weakening of the US dollar extends a helping hand to oil. According to Citigroup forecasts, against the background of the global economic recovery, the Fed’s adaptive monetary policy and the strengthening of China’s role in international trade, as it was in the 2000s when China joined the WTO, and the EURUSD pair was growing rapidly, the USD index may sink by 20% in 2021. If this is the case, then black gold, whose futures contracts are denominated in USD, may rise.

Technically, the strategy of buying the North Sea variety from the important levels of $41.95 and $42.7 per barrel (78.6% and 88.6% Fibonacci from wave 4-5) thanks to the Broadening Wedge pattern works like clockwork. We continue to buy Brent on pullbacks. The initial targets for the upward movement are $45.8 and $47. 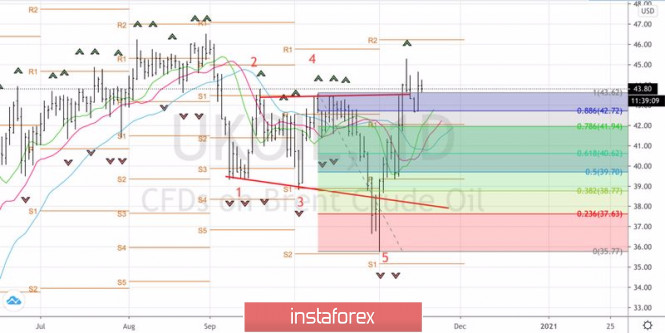