Yesterday’s trading on the GBP / USD currency pair was uneven, one might even say nervous. In addition to the hot topic of COVID-19, pressure on the British Pound was exerted by the pressing deadlines for reaching a Brexit deal. As time goes on, the trade agreement between the EU and the UK remains in limbo. The latest negotiations to conclude an agreement have begun in Brussels but the parties to the separation process are still unable to reach a compromise on this complex and extremely important issue. The EU and Britain have not yet agreed on the terms of trade between the two entities and meanwhile on December 31, when a decision should be made is very close. European officials are increasingly saying that the time is lost and it is too late. However, there are still slim chances that the possibilities of finding a compromise are not completely exhausted, because the transition period is not over.

From the events of today’s day, it is worth highlighting the speech of the head of the Bank of England, Andrew Bailey, as well as comments from a number of senior officials from the US Federal Reserve’s open market Committee. From the macroeconomic reports, I would highlight retail sales and industrial production in the United States. Forecasts and release times for these and other events can be found in the economic calendar. 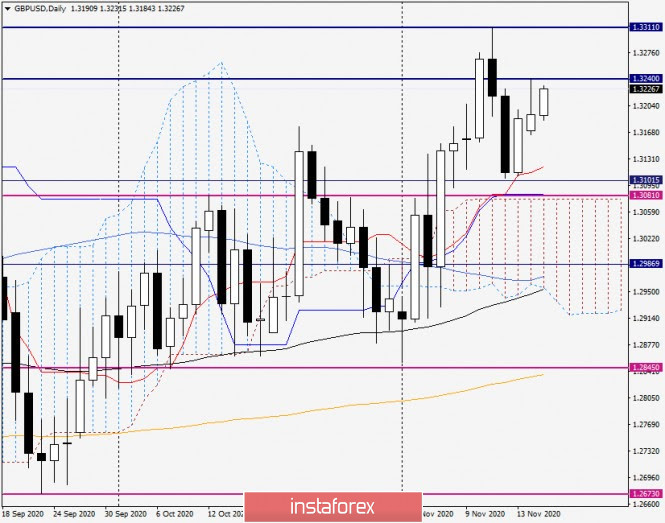 During yesterday’s trading, the 1.3240 mark stopped the pair’s rise and pushed it down. At the same time, it is worth noting that Monday’s trading ended below the important technical level of 1.3200.

Today, at the moment of writing, the pair is again trying to demonstrate strengthening and so far it is succeeding. A census of yesterday’s highs of 1.3240 will mark the next targets for the Pound bulls at 1.3280 and 1.3310. I believe that only a true breakdown of the last mark will determine the further upward direction of the instrument and open the way to higher prices. In turn, the bears on the pair need to lower the quote under the red line of the Tenkan indicator Ichimoku, and then gain a foothold below the important mark of 1.3100. The task is extremely difficult but much of today will depend on market sentiment, speeches of monetary officials and statistics from the United States. 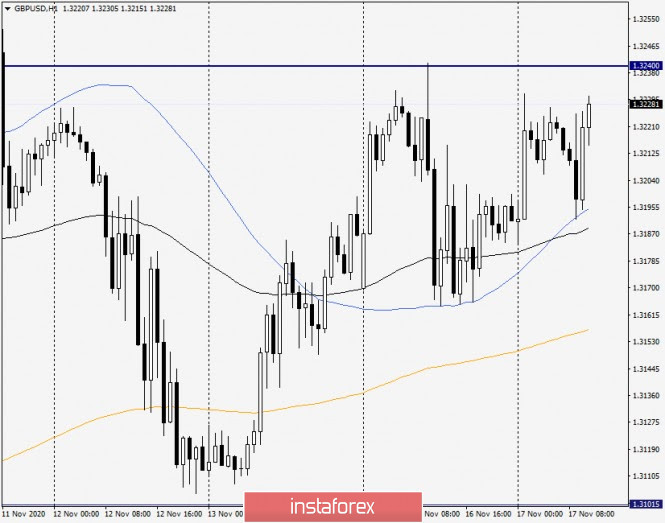 As you can see, on the hourly chart, the pair is well supported by the 50 simple and 89 exponential moving averages. This is not the first time that the Pound/Dollar pair has touched 50 MA and is turning up. Given that there was already a pullback to 50 MA, we can assume that the quote will continue to grow from current prices. At the same time, we should not rule out another decline in the area of 1.3200-1.3188 where two designated moving averages are located. Thus, the selected price zone can be considered for opening long positions. If bearish patterns of Japanese candlesticks appear on the hourly and/or four-hour timeframes in the area of sellers’ resistance at 1.3240-1.3280 or near 1.3300, an option for selling the British Pound will appear. When opening positions in either direction, you should wait for confirmation signals and not set big goals. The market situation is far from clear and can change frequently.