The USD index continues to decline, reflecting the overall market sentiment against the US currency. If in early November (on the eve of the US elections), the index was at 94.145, at the moment, it is at 92.460, demonstrating a steady downward movement.

The dollar’s decline is due to several factors: dropping demand for risky assets, rising COVID-19 incidence in the United States and uncertainty over a new stimulus package. Therefore, the positive news about the successful trials of another COVID-19 vaccine was not able to support the US dollar, and on the contrary, provoked interest in risky assets, as a result of which the safe dollar was again out of work. The positions of dollar bulls continue to weaken, and this fact is reflected in all dollar pairs. To add to that, the Australian dollar received support, albeit small, from the Reserve Bank, which published the minutes of its last meeting during the Asian session. 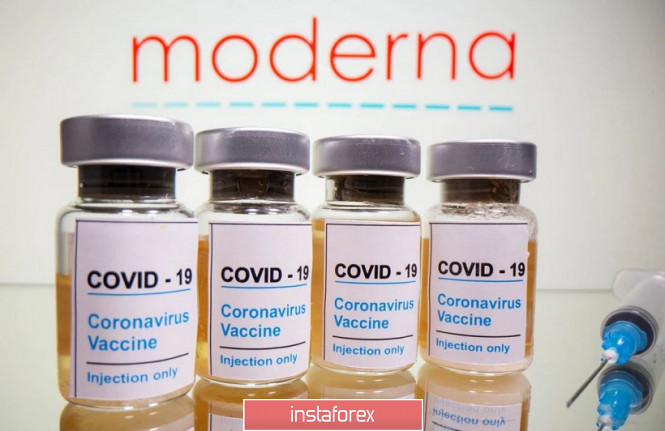 Just recently, American biotechnology company, Moderna, announced a 95% success rate for its COVID-19 vaccine. A week earlier, another pharmaceutical giant, Pfizer, announced a similar breakthrough (their vaccine has a 90% effectiveness rate), but the optimism from it did not last long. Literally the next day after the release, the significant disadvantages of the drug became clear: the vaccine includes synthetic messenger RNA to activate the immune system against the virus, thus, it must be stored (and therefore transported) at -70 ° C or below … At the same time, you can take it out of cold environment no more than four times. Such strict requirements neutralized all optimism regarding the effectiveness of this drug. Even in a European context, its spread will be a very difficult task, not to mention worldwide.

So, the vaccine “presented” yesterday has a very big advantage over the drug from its competitor – it does not require storage at ultra-low temperatures. Moderna vaccine does not deteriorate at standard refrigerator temperatures (2-8 °). And although there are a number of questions about this drug (in particular, there is no definitive data on the effectiveness among the elderly), the mood of the markets changed markedly yesterday. It also became known that the European Commission has decided to authorize the conclusion of the deal, which involves the supply of 400 million doses. Similar intentions were voiced by representatives of the authorities of other countries.

In the context of the foreign exchange market, this news provoked an increased interest in risky assets, while the US dollar, which is traditionally used as a protective instrument, noticeably weakened in position. This alignment allowed the bulls to organize another assault on the 73rd figure. This time, they managed to consolidate the quotes in the area, but failed to approach the main resistance level at 0.7350 (upper line of the Bollinger Bands indicator on the daily chart).

At the same time, the Australian dollar received support, albeit small, from the Reserve Bank of Australia, when the central bank published its November protocol today. According to the minutes, the RBA lowered the interest rate to 0.1%, and expanded its purchases of 5 to 10-year government bonds to an amount of A $ 100 billion (over the next 6 months).

This action did not come as a surprise to the market, since some experts already expected the rate to be cut to zero at the beginning of next year. But judging by the rhetoric of the protocol, it seems that the RBA does not intend to bring key rates to a negative level. According to the members, “there is no point in making rates even lower, and negative rates are extremely unlikely.”

And although the rest of the document were extremely cautious and “dovish” in nature (for example, the RBA ruled out a rate hike for three years), the Australian dollar ignored the negative, focusing on the wait-and-see position of the Central Bank. 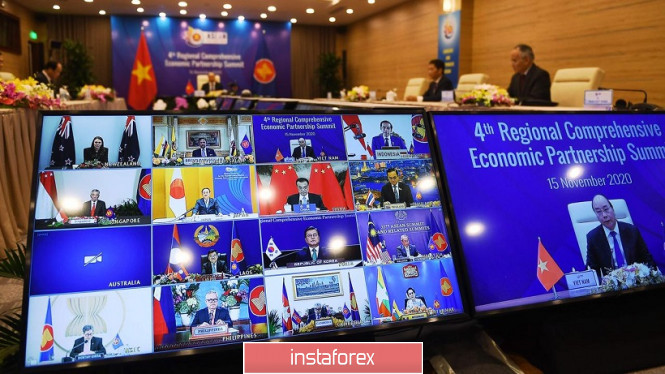 Another factor that provided support to the aussie is the recent creation of new free trade zone in Asia (the largest in the world). Among the signatories of the Regional Comprehensive Economic Partnership are Australia, China, South Korea, Japan and New Zealand (15 countries in total).

In the context of the AUD/USD pair, the most noteworthy is the further trade relations between Beijing and Canberra, who, just recently, were under political conflict. In particular, imports of Australian coal to China fell to their lowest level this year. According to media reports, Australia was “replaced” by Mongolia, with which China has no political contradictions.

But the very fact that a free trade zone was created, where both Australia and China are participating, the position of the aussie recovered. Traders are now cautiously optimistic about the end of the trade war between the two countries.

In fact, the current fundamental background suggests that the AUD / USD pair, in the medium term, will again try to storm the main resistance level at 0.7350 (the upper line of the Bollinger Bands indicator on the daily chart). Thus, long positions can be opened either from current positions or during a downward correction.