The British pound sterling paired with the US dollar continues quite contradictory movements. The pair’s quotes are currently located above the moving average line, which seems to maintain an upward trend. However, just on Friday, the price was already falling below the moving average, but could not continue to move down. Now it may be the opposite, the pair may start a new round of downward movement despite fixing above the moving average. If you look at the movement of the pound/dollar pair in the last few months, you can see that the price very often overcomes the moving average, however, it does not lead to a change in the trend to the opposite. And we have already talked about the fundamental background a million times and nothing has changed for the British pound in recent days. The future of the British economy is so hazy that even all American problems look trivial against this background. Therefore, we continue to expect the British pound to fall despite the epidemiological problems in the United States, as well as all the political confusion that has persisted there in recent months.

Meanwhile, negotiations on a trade agreement between the European Union and the UK, which will take effect (in theory) after the end of the “transition period”, that is, on January 1, 2021, are continuing. The next round of talks began on Sunday in Brussels, as stated by the chief negotiator from the British side, David Frost. Frost also said that since October 22, the parties have been negotiating every day, and during this time there have been some positive developments. David Frost expressed hope that the parties will eventually come to an agreement but also warned that negotiations may fail. According to Frost, there is a common draft agreement between London and Brussels, however, there are still serious differences on several important issues. Meanwhile, “Boris Johnson’s deadline” was this Sunday. Recall that on October 15, Boris Johnson graciously allowed the negotiating groups to extend the terms of discussion of the deal for 1 month. Naturally, the parties did not have time until November 15, since it was clear from the very beginning of the negotiations that such deals are not concluded in a few months. However, the point is not even in “Johnson’s deadlines”. The bottom line is that the end of the “transition period”, which the same British Prime Minister refused to extend, is inexorably approaching. Given that it will take more time for both Parliaments to ratify and accept the deal, the negotiations need to be completed in the next few days to make it to December 31. However, several British media call the date of November 19, when everything can end. On this day, the parties will either announce an agreement or another failure. The EU summit is scheduled for this day and it is at this summit that the final decision should be made. If a deal cannot be agreed before then, then from January 1, Britain and the EU will trade with each other according to WTO rules. Of course, no one forbids them to resume negotiations in the new year. But in any case, this means that for a while the Alliance and the Kingdom will trade with each other on not the most favorable terms.

As we can see, there is still no positive news from the UK. The problems remain the same and only their solution can lead to some weakening of the negative situation for the pound. What is interesting is that with such a failed fundamental background, the pound continues to show growth. Thus, it seems that the current exchange rate of the pair already includes a deal with the European Union. If so, then if an agreement is announced, there may not be any special reaction from traders. And if there is no announcement, the pound may rush down with renewed vigor. However, Brexit is not alone. The Foggy Albion is full of other problems. For example, epidemiological. We said that the situation with the “coronavirus” is very difficult in the United States, however, the situation in the UK is no better. The country remains in first place among the EU countries in the number of deaths from the “Chinese virus”, as well as the third in the number of cases since the beginning of the pandemic. The number of daily recorded cases of COVID-2019 is growing day by day, as in the States. And the UK government does not want to introduce quarantine (“lockdown”), putting the priority of the economy over health care. In principle, the situation now looks like this: the British are allowed to go to work and school, as well as to places of basic necessity and to walk in the fresh air, but all other activities are prohibited. Boris Johnson himself went into self-isolation, as he came into contact with an infected “coronavirus”. The Prime Minister said that he has no signs of illness, but, according to quarantine rules, he is forced to stay out of contact with anyone for some time. Johnson is going to work remotely.

Based on all the above, we expect a resumption of the downward movement in the near future. In America, the situation is difficult, but in the UK it is even more difficult. In America, the power will change in 10 weeks, in the UK – in a few years. The United States can expect an improvement in the economic, epidemiological, geopolitical, and political picture, while the British can only expect things to get even worse. Thus, we are waiting for a new price consolidation below the moving average line. It should also be noted that there are almost no “ordinary” statistics and “ordinary” reports now. Bank of England Governor Andrew Bailey has been making a lot of speeches lately, but he doesn’t tell the markets anything extravagant. His speeches are more focused on the topic of the pandemic and the vaccine. 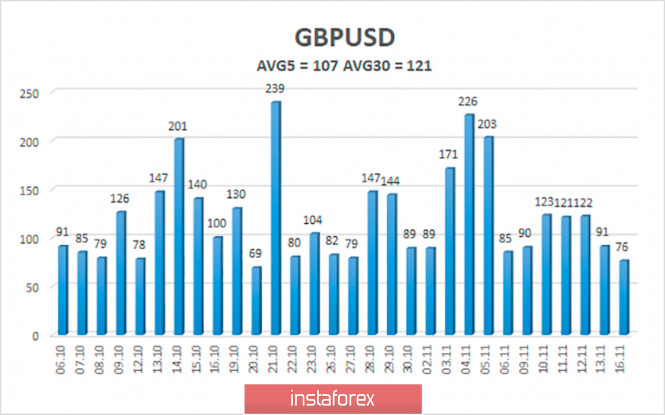 The average volatility of the GBP/USD pair is currently 110 points per day. For the pound/dollar pair, this value is “high”. On Tuesday, November 17, thus, we expect movement inside the channel, limited by the levels of 1.3081 and 1.3295. A reversal of the Heiken Ashi indicator to the top signals a possible resumption of the upward movement.

Technical analysis of EUR/USD for November 30, 2020

Trading idea for the NZD/CAD pair