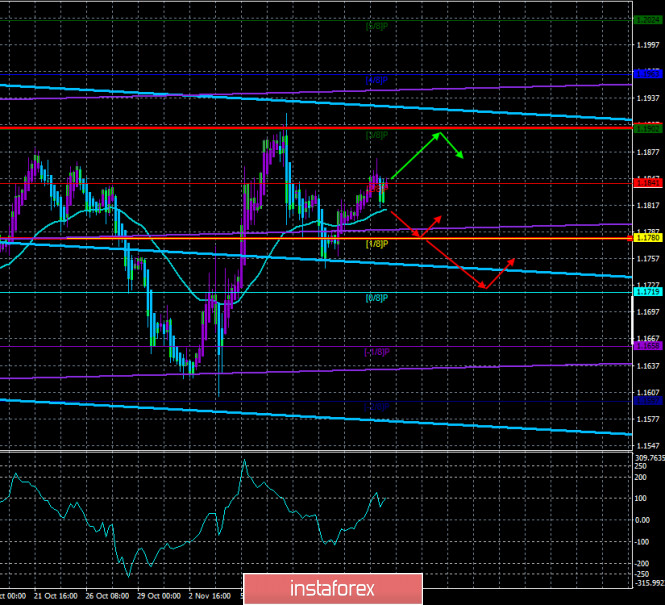 The first trading day of the week for the EUR/USD pair was very quiet. Volatility during the day did not exceed 50-60 points, which is the average value for this pair. This is exactly what we said in previous reviews: on Monday, trading is unlikely to be overly active. Especially if you take into account the lack of macroeconomic publications and important news. And there was no news that day. No, of course, certain messages were received during the day, however, there was nothing that could stir up the markets. Thus, neither the fundamental background nor the technical picture changed at all during Monday, November 16. The pair is still trading inside the side channel of 1.1700-1.1900, so there is no long-term trend. Short-term trends appear from time to time, however, they are not always there. Therefore, market participants should still take into account the fact that a strong movement in one direction should not be expected now.

Naturally, the main newsmaker in America remains the current President, Donald Trump. He continues to load Twitter daily with angry posts about election fraud, as well as threats of legal proceedings against anyone who violated the fair election procedure. However, now it seems that no one is listening to Trump anymore. That is, he is still the President of the United States, but everyone already treats him as the loser of the election. Consequently, the President is already called Joe Biden. However, we remind traders that Trump will remain President for another 10 weeks, until January 20, 2021. And there are no restrictions on its powers. That is, formally, it can tighten sanctions against China tomorrow or start a new trade war with any country or make some other “strong” decision. Yesterday, such news was made available to market participants. It became known that Trump is going to tighten sanctions measures against China. For what? According to some American publications, to “leave a memory” and make the task of reconciliation between China and the United States as difficult as possible, which Joe Biden may pursue. It is also reported that the White House is going to impose many sanctions against Chinese officials, as well as limit and complicate the process of trade between the two countries as much as possible. American media also report that Trump also pursues the goal of maintaining the country’s chosen course of development for as long as possible. And in this course, there is a clear hostility against China. Maybe Trump intended to run for President in 4 years? This will not even be surprising. Age, as this election has shown, is not a hindrance at all. Joe Biden is 78 years old. In four years, he will be 82 and Trump will be 78. Thus, the current President has a chance of winning the elections in 2024. Especially if everything he’s said in recent months about Joe Biden and his intentions as President turns out to be true. Let’s imagine a hypothetical situation that in four years Biden’s results will be unsatisfactory, and the situation in America will worsen. Then it turns out that Trump was right and this judgment alone may be enough for Americans to vote for him in 2024. In general, President Trump may still be in power for a long time and will wait for a new chance to climb to the very top of politics in the United States.

Meanwhile, the situation in the US may start to heat up again. And this warming up is unlikely to bring anything positive to the US currency. In recent weeks, we have actively written about the fact that the US dollar may start to rise in price after the election, as the tension should subside from the markets, and uncertainty should be leveled. However, as the first two weeks after the election showed, nothing much has changed in the mood of traders. They still keep the pair inside the channel of $1.17-$1.19 and can’t get the price out of it. Thus, there were no special reasons for buying the European currency, however, the US dollar does not give any reasons for buying it. It turns out that the struggle between the two currencies will again slide into the area of “which country is more negative”. In the European Union, the main problem now is the “coronavirus”, its second wave. However, many countries have introduced repeated “lockdowns”, so the situation should stabilize in the near future. In the States, there is no “lockdown”, and the number of cases is growing day by day. Last time (a few weeks ago), we reported about 50-60 thousand cases daily. Then there were elections, and the topic of “coronavirus” faded into the background. And now every day in the United States, 150-200 thousand cases of the disease are recorded. Even in a developed country like the United States, the medical system can collapse at these rates. However, Trump does not say anything about this. And in general, for a very long time in his speeches, he spoke about the pandemic. Last time, at one of his campaign rallies, he said that American doctors are very smart and get fabulous profits from the “coronavirus”. The fact that American doctors themselves are sick and dying from COVID-2019, Trump chose to remain silent. In general, the US dollar may again come under serious market pressure in the current conditions due to the extremely complex epidemiological situation in the US. And the economy of this country may begin to slow down or shrink again because of this. Thus, the euro may start to grow again against the US currency without correcting after the growth of 1300 points. Well, all possible actions of Donald Trump as President in the next 10 weeks may lead to an even greater fall in the dollar, since Trump has not yet announced anything worthwhile for his final period in power.

From a technical point of view, the euro/dollar pair continues to remain above the moving average, so the upward trend continues. Therefore, a rebound from the moving average may trigger a new round of upward movement to the Murray level “3/8”-1.1902, which is also the upper line of the side channel. 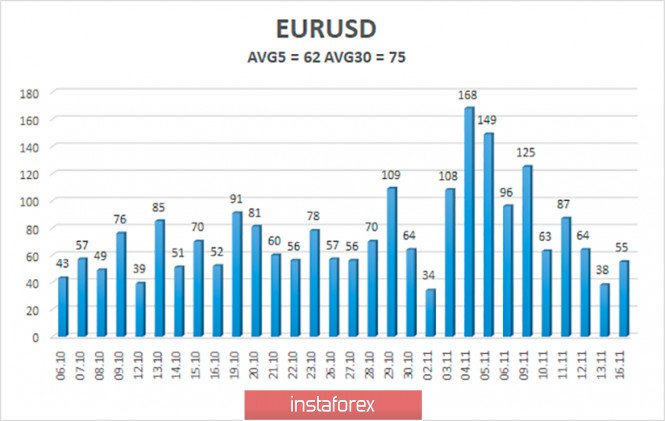 The volatility of the euro/dollar currency pair as of November 17 is 62 points and is characterized as “average”. Thus, we expect the pair to move today between the levels of 1.1779 and 1.1903. A reversal of the Heiken Ashi indicator to the top may signal a new round of upward movement.