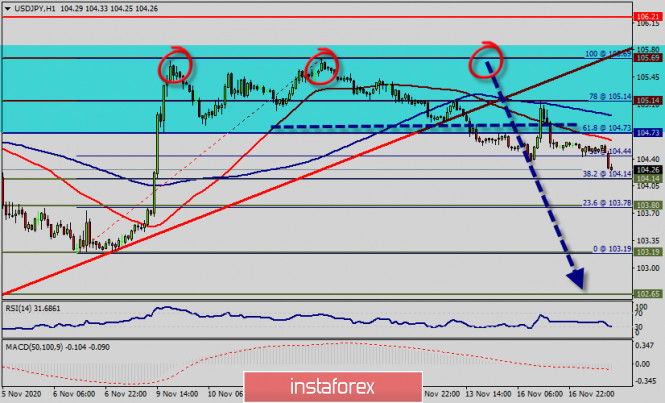 The JPY may recover further against the US Dollar having found resistance at the 105.14 figure, then the dominant long-term downtrend is resumed.

The USD/JPY pair has recently pushed below a near-term rising trend line from the beginning of this week. Is the pair getting ready to make a pronounced move to the downside.

If the price continues to move lower, immediate support is coming from the 104.14 level, which is the 38.2% Fibonacci retracement level of the up leg from 104.14 to 1.05.14, before flirting with the 103.78 barrier, taken from the latest low. A decline below these levels could open the door for the inside swing high of 103.19, registered in the beginning of October 2020.

Therefore, we expect a range of 154 pips in coming two days. The trend is still below the 100 EMA for that the bearish outlook remains the same as long as the 100 EMA is headed to the downside.

Hence, the price spot of 1.1239 remains a significant resistance zone.

Consequently, there is a possibility that the USD/JPY pair will move downside. The structure of a fall does not look corrective. In order to indicate a bearish opportunity below 104.73, sell below 104.73 with the first target at 103.78.

Besides, the weekly support 1 is seen at the level of 103.19. However, traders should watch for any sign of a bullish rejection that occurs around 103.19. The level of 103.19coincides with double bottom, which is expected to act as a major resistance today.

Since the trend is below the 61.8% Fibonacci level (104.73), the market is still in a downtrend. Overall, we still prefer the bearish scenario.