Bitcoin whale put a $ 100 million bitcoin short order on one of the cryptocurrency exchanges. While Bitcoin’s dynamics remain strong, there are many reasons why the $ 16,000 level is an attractive area for sellers.

At $ 16,000, there is a lot of liquidity mainly due to high resistance. This level saw relatively high demand from buyers, as evidenced by the influx of stablecoins. Consequently, the $ 16,000 battle between buyers and sellers makes it a highly liquid area that is very attractive to sellers.

On November 15, someone aggressively sold $ 100 million worth of bitcoins through ByBit. Even the day before yesterday in the morning, sales orders grew in just a few hours to the value of nearly $ 3.5 million.

Judging from a sudden sell order of such a large scale, this could result in two scenarios: First, the seller could cause a squeeze, which could in turn increase the price of bitcoin. Second, it may still exert selling pressure on BTC.

Meanwhile, in the last 24 hours, huge amounts of digital currency were deposited on other exchanges. According to CryptoQuant data, the American cryptocurrency exchange Gemini received a deposit of 9,000 BTC.

Bitcoin whales typically use exchanges with strict compliance and strict regulatory measures. Gemini is one of them, but also Coinbase.

The BTC/USD pair has made another yearly high at the level of $16,811 and the way to $17,000 remains intact. The market volatility has decreased, but the price of Bitcoin is still above $16,000 despite the recent fell out from the ascending channel. The intraday technical support is seen at the level of $15,651 and the technical resistance is now a swing high located at $16,418. As long as the market trades above the level of $15,000 the short-term outlook remains bullish.

Bitcoin is trading at the yearly highs and bulls are in control of the market. The up trend continues and the next long term target for Bitcoin is seen at the level of $16,000, so any correction or local pull-back should be used to open the buy orders. This scenario is valid as long as the level of $10,000 is broken. 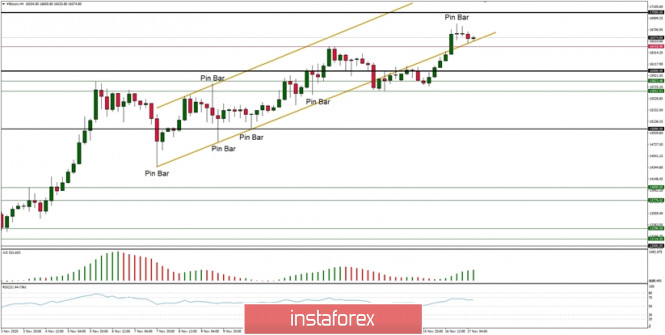