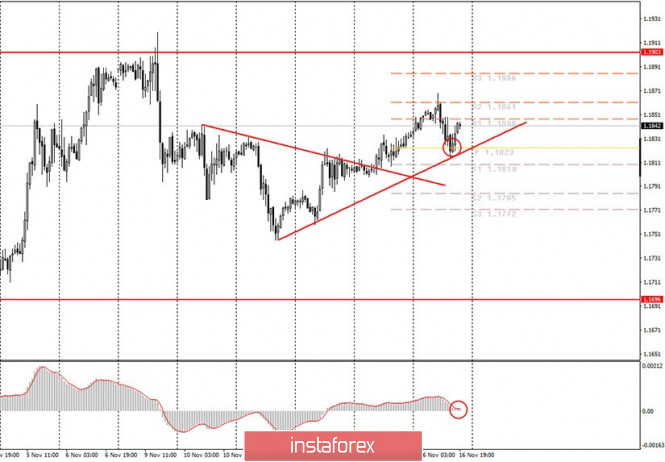 The EUR/USD currency pair sharply corrected on Monday, but it was thanks to this correction that a new upward trend line appeared, and this particular trend is visible to novice traders and will also signal the moment when it will be broken. In general, it is much more convenient to trade any pair and instrument when there is a trend line or channel. After the price settled above the downward trend line, traders were already advised to consider options for buy positions. In principle, today’s upward movement lasted only until about lunch. Then the price began to fall, which the MACD indicator quickly responded to by turning down. However, a couple of hours ago, the MACD indicator turned up again, which together with a new trend line and a rebound from it gives a good buy signal. As before, we expect an upward movement no further than the upper limit of the 1.17-1.19 horizontal channel, in which the euro/dollar pair has been trading for three months.

Novice traders had nothing to pay attention to on Monday. This happens from time to time. However, we already expected that there will hardly be active trading and strong movements in the pair. Not a single report nor an important event during the day. Even the speech of the head of the European Central Bank Christine Lagarde in no way influenced the movement of the pair. Thus, traders will have to wait for new information, which may come at any time and is unplanned. Fortunately, a trend line has now appeared, which greatly facilitates the process of analysis and forecasting.

Lagarde is set to speak again on Tuesday. However, most likely, it will also not be interesting, so there will be no reaction to it, just like it was to today’s speech or Friday’s speech. The US is set to release its data for October retail sales, but the actual change for this month must be very different from the forecast in order for the markets to react to it. In recent months, traders have often ignored macroeconomic statistics, paying attention only to the most important reports like inflation or GDP. And even then not always. Thus, it is highly likely that tomorrow’s fundamental background will not affect the course of trading in any way. Perhaps some new information will come from Donald Trump, really important information, but now there is very little chance of that.

1) Long positions are now relevant since traders managed to take the pair above the downward trend line, and then an upward trend line appeared. The growth potential of the euro, as always, is limited by the 1.1903 level, however, you can manage to get a profit even before this level. The MACD indicator has already produced a new buy signal, therefore you are advised to trade up while aiming for 1.1861 and 1.1886.

2) Trading for a fall at this time is irrelevant, since there is a pronounced upward trend. Thus, novice traders are advised to wait for the eloquent completion of the upward trend in order to have a reason to open short positions. Namely, the price should settle below the trend line. In this case, open short positions while aiming for 1.1810 and 1.1785.