At the auction on November 9-13, the pound/dollar currency pair showed growth, but it was quite modest. The desire of the British currency to strengthen was held back by the difficult epidemiological situation with the spread of COVID-19, both in the UK and in the United States of America. Considering this situation, risk sentiment was minimized and the growth of the pound was largely influenced by the technical picture. 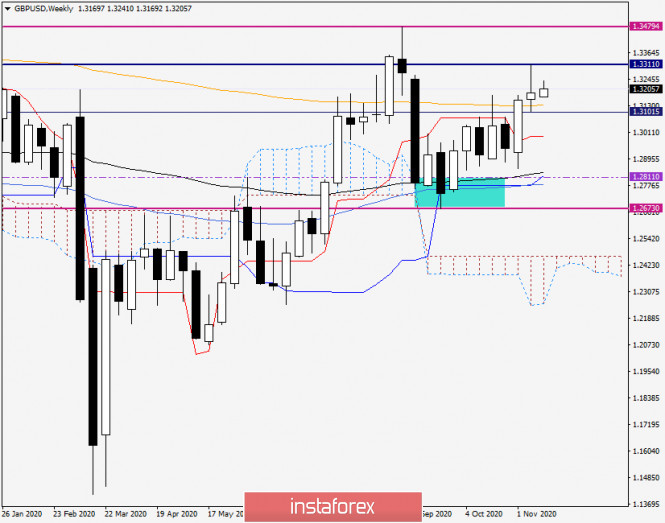 The prospect of further growth was seen after the end of the week before last, with the formation of a large bullish candle with a closing price above the 200 exponential moving average. As a matter of fact, this is exactly what happened, but the strong resistance of sellers in the area of 1.3300 limited the rate rise and did not allow the pair to go higher. As a result, the last weekly candle formed with a long upper shadow, which turned out to be much larger than the bullish body of the candle itself. Often, after the appearance of such candles, the exchange rate decreases, but the current market situation is far from unambiguous, both options for price movement should be considered. The GBP/USD pair is trading in the range of 1.3300-1.3100 at the moment, the exit from which can indicate the further direction of the quote. The census of the previous highs of 1.3311 and the closing of weekly trading above this mark signals the subsequent growth of the British currency. If the bears on the pound manage to rewrite the previous lows and close the weekly trading under the level of 1.3100, it will be time to trust the continuation of the downward scenario. 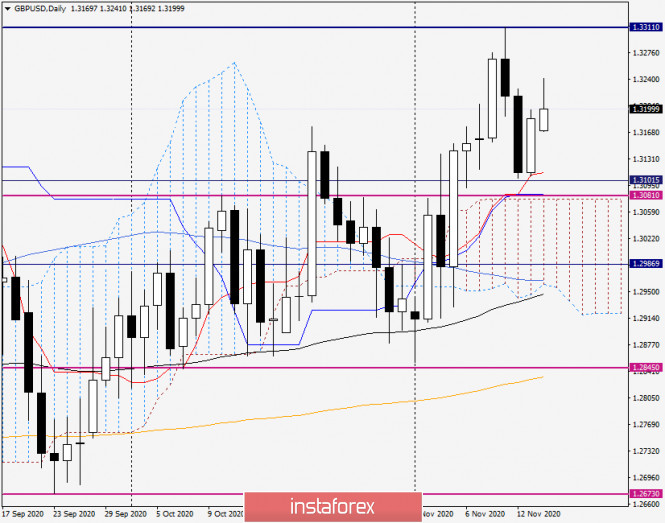 It can be viewed in this timeframe that the pair rolled back to 1.3105 upon rising to 1.3311. Finding support at this mark and the Tenkan line of the Ichimoku indicator, it turned back to the rise.

In today’s session, the British pound sterling is strengthening and currently trading near 1.3210. At the same time, the price rebound is clearly visible, which occurred from 1.3240, where strong resistance from sellers is apparently concentrated. The current situation for making trading decisions is by no means simple. In my own opinion, there is a possibility of positioning in both directions.

The next purchases can be planned upon the decline in the price zone 1.3200-1.3175. It is recommended to look for opening long positions at more favorable prices following the decline to the area of 1.3150-1.3130. Sales will become relevant after the appearance in the price zone of 1.3250-1.3300 bearish models of Japanese candles on the daily, four-hour, and hourly charts. It is believed that before opening positions in both directions, it is better to enlist the support of confirming signals, which can be the corresponding candlestick analysis models.

Of the events that this week may have an impact on the dynamics of the pound sterling, it is worth highlighting tomorrow’s speech by the head of the Bank of England Andrew Bailey, as well as data on the UK consumer price index, which will be released on Wednesday, November 18.