At the end of last week, the main currency pair of the Forex market declined, losing 0.35%. It is worth noting that the EUR/USD pair was trading without a clear direction. The mood of market participants was still influenced by news about the results of the US presidential election, as well as disappointing data on the spread of the second wave of the COVID-19 pandemic. The most negative situation with the daily number of coronavirus infections remains in the United States of America, where more than one hundred thousand new cases of infection are detected daily. Of the European countries, the virus is most rampant in France and Italy. In several countries of the Old World, a nationwide quarantine is being introduced. As for the results of the US presidential election, Donald Trump and his supporters still do not recognize the results of the election, due to fraud.

In general, the situation in the markets does not encourage risky operations, investors are cautious and more inclined to go to protective havens. If such sentiments persist, the US dollar will continue to enjoy a fairly high demand, and risky assets will lose their positions. As for the macroeconomic reports, this week is not scheduled for such important data that can significantly affect the balance of power and market sentiment. But there will be no shortage of speeches from monetary officials of the world’s largest central banks. 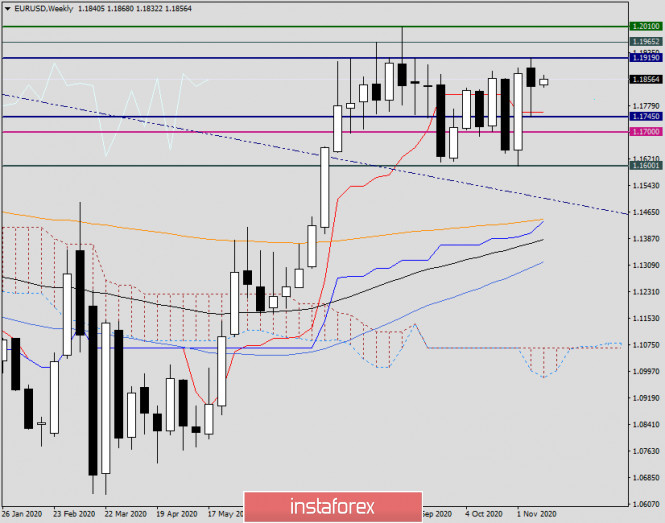 If you look at the weekly chart and the last candle, it is necessary to note a clear development of technical levels of 1.1745 and 1.1917. The first level, which can be considered not only technical but also historical, stopped the pressure of the bears and acted as strong support. And the mark of 1.1917 remained an insurmountable resistance and did not let the quote go higher. Regarding the candle itself, you should pay attention to its long lower shadow, which can signal a subsequent growth, especially since it is visible that bullish and bearish candles alternate. However, there are no clear dynamics for EUR/USD and trading takes place in the range of 1.1600-1.1900, the exit from which can determine the further direction of the price. 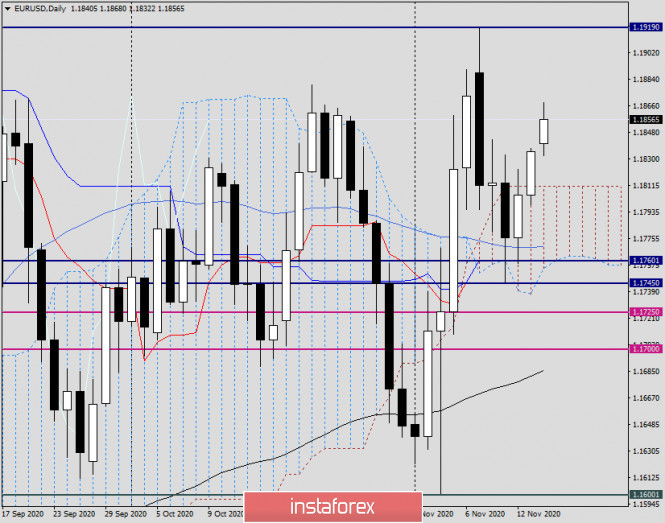 But on the daily EUR/USD chart, it looks quite bullish. This can be judged by the fact that the pair exits up from the Ichimoku indicator cloud. It should be noted that before this, the bears could not break through the 50 simple moving average and bring the quote down from the cloud, after which the course turned in a northerly direction.

Today, at the time of writing, the euro/dollar is strengthening and trading near the strong technical level of 1.1860. If the growth continues, the main goal of the euro bulls will be the maximum trading values on November 9 at 1.1919. Only a true breakdown of this level will indicate the probability of further growth, the main goal of which will be the area of 1.2000-1.2010.

Now for trading recommendations. Given the ambiguous nature of trading and frequent changes in market sentiment, there is still a possibility of positioning in both directions. It is better to consider purchases after pullbacks to the price zone of 1.1830-1.1800 and the appearance of bullish patterns of Japanese candles on the daily and smaller timeframes. If bearish signals appear in the area of 1.1880-1.1920 on the same charts, this will be the basis for opening short positions on EUR/USD.

From today’s events, it is worth paying attention to the speech of ECB President Christine Lagarde, which is scheduled for 14:00 (London time). From the US data, we can distinguish the index of activity in the manufacturing sector from the Federal Reserve of New York, which will be published at 14:30 London time.