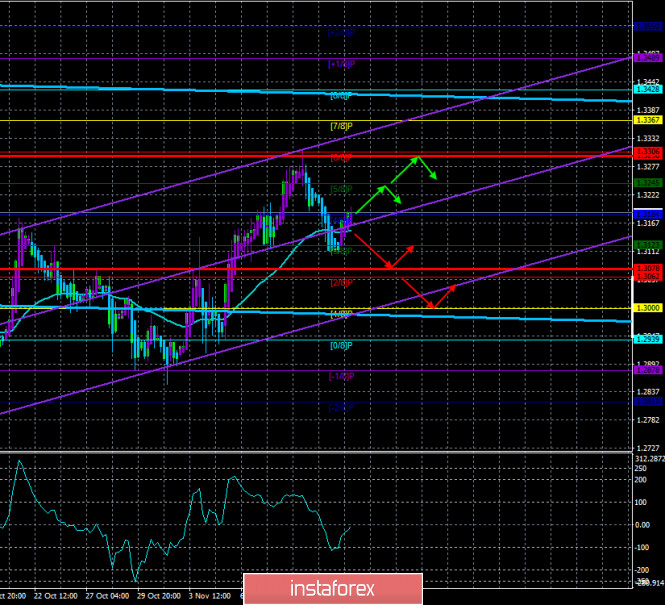 The British pound sterling against the US dollar continues to trade very ugly from a technical point of view. In the last couple of months, the pair have regularly crossed the moving average line. However, this is not a problem. The problem is that the trend does not change after overcoming the moving average and the pair returns to its main movement. Thus, trading the pound/dollar pair has been very difficult recently. And this is only a graphical picture that constantly displays pullbacks that lead to consolidation below the moving average (the trend in recent weeks is upward). If we also remember the fundamental component. We have repeatedly said that we do not see any reasons for the strengthening of the British pound. The fundamental background in the UK is now so bad that it is the pound sterling that should fall, not the dollar. Moreover, the presidential elections were held in the United States, which means that the uncertainty factor has been exhausted. Markets should have calmed down and stopped getting rid of the US currency. However, this has not happened at the moment. And if you add here the COT reports, which in recent weeks show complete uncertainty with the mood of professional traders, it becomes obvious that the pound/dollar pair is now trading very unconventionally, so it is extremely difficult to predict its behavior even for the next couple of days.

Meanwhile, there was a resounding reshuffle in the British Parliament. Dominic Cummings has resigned as chief adviser to Boris Johnson. Cummings is called the “architect of Brexit”, largely thanks to him in 2016, the British voted “for” leaving the EU. It is believed that the author of the most “cool” and “loud” steps of Boris Johnson is Cummings. Last year, when Boris Johnson excluded anyone from the Conservative party who did not support a “hard” Brexit (even before the dissolution of Parliament and the election), many believe that Cummings is responsible for this. At the same time, the deadline set for negotiations on the Brexit deal is coming to an end. And it is at this difficult moment, when London needs a strong government more than ever, that another high-profile resignation occurs, of which there was a lot under the government of Boris Johnson. We can not say that this news is “black” for the pound, but this is another portion of the negative. Especially now, when, in fact, the next deadline for negotiations, which was set by Johnson himself, has passed. We received no news about progress in the negotiations at all. The UK is just going with the flow and hoping for an acceptable result.

Meanwhile, the COVID-2019 epidemic continues to rage in the Foggy Albion. In the past few days, the number of daily reported cases has jumped to 30,000, and death rates have also increased significantly. That is, we can already say that the “hard” quarantine of Boris Johnson, which many doctors and politicians scold for being too soft, does not work. Johnson, like his American counterpart who lost the recent election, Donald Trump, is an adherent of the view that the economy should work even during a pandemic. Otherwise, the damage to the population and the country will be even worse than from the epidemic itself. However, as practice shows, in the UK and the US, the economy is working, but this only leads to new cases of infection and new deaths. Many believe that it was Trump’s disregard for the “coronavirus” that cost him a second term. Boris Johnson may also soon follow his American friend into retirement. Especially if an agreement with Brussels on a trade deal still fails. And now everything is going to fail. At least none of the parties gave any signals that there is progress.

Well, we have already talked about the problems of the UK economy a million times. In short, the economy lost a lot in 2020. At the end of this year, it may return to decline and contraction, and 2021 may be a new shock for British businesses, citizens, and the economy itself. Because, in addition to the still unresolved problems with the pandemic and recovery, trade with the EU under WTO rules will also be added to the problems, which will inevitably cause a new reduction in GDP. And even if the agreement is signed, it will only mitigate the negative consequences of the “divorce” with the European Union. Overall, the outlook for the British economy remains extremely dim. And the Bank of England, therefore, will be forced to resort to negative rates. And negative rates are an extra “dovish” move that will inevitably lead to a fall in the British currency. This is how things are in the Kingdom a month and a half before the new year and a month and a half before the country’s independence from the European Union. 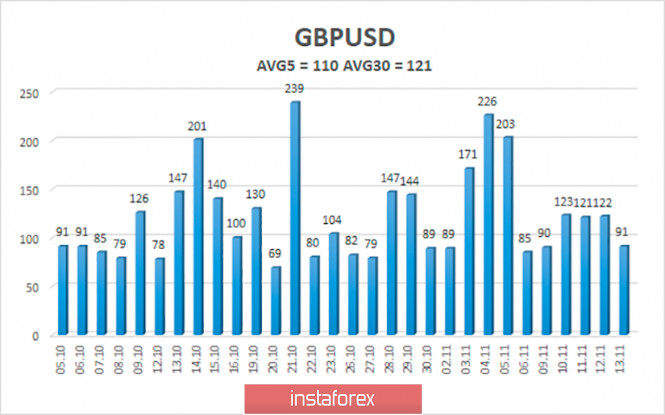 The average volatility of the GBP/USD pair is currently 110 points per day. For the pound/dollar pair, this value is “high”. On Monday, November 16, thus, we expect movement inside the channel, limited by the levels of 1.3078 and 1.3298. A reversal of the Heiken Ashi indicator downwards signals a new round of downward movement.

The GBP/USD pair is trying to return to the upward movement on the 4-hour timeframe. Thus, today it is recommended to keep open long positions with targets of 1.3245 and 1.3298 until the new reversal of the Heiken Ashi indicator down. It is recommended to trade the pair down with the targets of 1.3078 and 1.3000 if the price is again fixed below the moving average line.