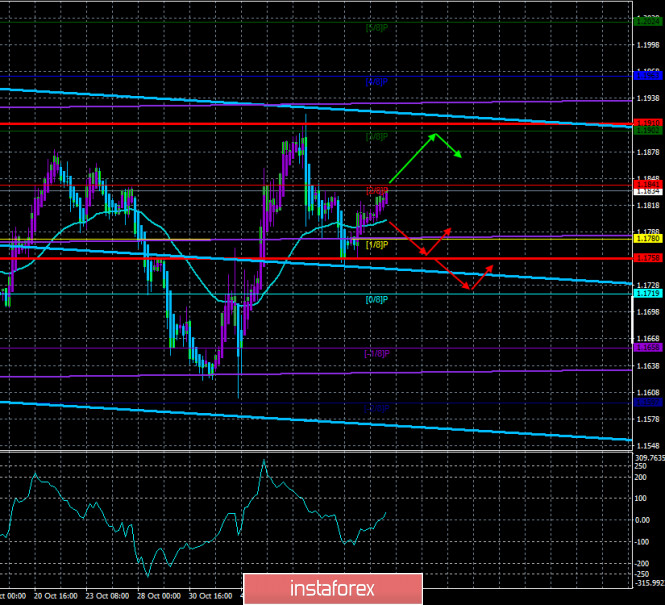 The last trading day of the week for the EUR/USD pair was in an upward movement. However, this is only in the short term. In the long term, the sideways trend remains, which traders failed to break in 3 months. At the moment, the pair’s quotes are once again fixed above the moving average line, which means that traders can expect an upward movement to the upper border of the 1.1900 side channel. However, we once again draw the attention of traders to the fact that in the last three months the pair has been trading, by and large, in the flat. And this point should be taken into account when opening any positions. Even such important topics as “presidential elections in the USA”, “coronavirus in the EU and the USA”, “absence of a stimulus package in the USA”, as well as an outright political crisis in America failed to contribute to the exit of quotes from the flat. There is still a situation in which traders are afraid of new large purchases of the European currency, which has already risen by 10-13 cents against the dollar in the last 6-7 months. And the bears do not find any reason to buy the US currency, although now it seems that the tension that has persisted recently due to the elections should have subsided.

Meanwhile, Donald Trump, in a manner unique to him, admitted that Joe Biden won the election. Through his favorite Twitter, Trump wrote that “the election was rigged and only thanks to this Biden won”. This message was immediately marked as “questionable” by the social network itself, which regularly does this with the tweets of the US President. At the same time, he does this quite rightly, because the current President continues to make absolutely unfounded statements and accusations. As a mantra, Trump continues to repeat that GOP observers were not allowed to enter many polling stations, and ballots with votes for Joe Biden continued to arrive after November 4 and should not have been counted in any case. However, even such a simple statement is smashed to smithereens by simple logic. If ballots continued to arrive after November 4 and were taken into account by election commissions, why did no one try to hide or disguise this? If it’s illegal. If it’s legal, why does Trump say it’s a fraud? In general, the more Trump makes such statements, the more the whole world is convinced that he lost the election and is now just engaged in “waving his fists after a fight”. Joe Biden was congratulated by almost all world leaders, thus recognizing the victory of the Democrat in the elections and the elections themselves.

But don’t forget about the economy, either. Unfortunately, recent economic news has been closely shadowed by political and epidemiological news. This applies to both the European Union and America. With America, everything is clear, with what has long been. The government of the country refused to fight the epidemic using quarantines and “lockdowns”. Therefore, the United States remains in first place in the world in the number of cases and deaths from COVID-2019. However, it is precisely because the economy continues to function that it also continues to recover. However, it is quite difficult to estimate the pace of its recovery. After all, there were serious GDP losses in the second quarter and strong growth in the third. But if you add both values for the second and third quarters together, it becomes clear that the final contraction of the economy is still present and it is quite large. For example, it is much lower in the European Union. Thus, the American economy, starting from the third quarter, may be recovering faster than the European economy, but the European economy lost three times less GDP in the second quarter. We believe that the lack of strengthening of the US dollar in the last three months, when even technical factors that require correction spoke in favor of this, most eloquently shows the state of the US economy at this time.

It is also quite difficult to compare the American and European economies. At least because Europe has a full-fledged “lockdown”, so the economy will experience problems in November and December in any case. If the “hard” quarantine was completely painless, it would be introduced all over the world. However, this is an extreme and very drastic measure. Even last week’s speeches by Christine Lagarde and Jerome Powell confirmed that neither regulator is optimistic. Both heads of the Central Bank noted that the creation of an effective vaccine is very good, but both economies continue to be under pressure, require incentives, and vaccination should become publicly available so that the negative impact on the economy due to the “coronavirus” completely disappears. Lagarde notes that the European economy is recovering unsteadily, with “jumps” and “jerks”. The head of the ECB also fears a full-scale recession due to a repeated “lockdown”. According to her, households may become more fearful of the future and increase their savings instead of investing them and putting them into business, so many credit firms may cease to exist.

But Jerome Powell said he was very concerned about the fate of women, children, and business owners who face the long-term consequences of the “coronavirus crisis”. According to Powell, children do not get enough education as a result of the crisis, women drop out of the labor market (not by their own will), and workers lose their jobs and their standard of living. Powell also noted that the economy is recovering, but will never return to its pre-crisis form. The economy is becoming more technological, less dependent on workers. Accordingly, despite the recovery of the labor market, a full recovery to pre-crisis levels may not occur. Many companies and industries try to replace human labor with automation as much as possible. Also, Powell once again noted that about 11 million Americans remain unemployed and they need the support of the government, which is still unable to agree on a new package of stimulus measures that includes assistance to the unemployed and businesses. “My main conclusion is that even after the unemployment rate drops and the vaccine is available, a significant group of workers will still need support until they find their place in a post-pandemic environment,” Powell concluded.

Thus, both the European and American economies continue to be very “sick” and, despite the creation of a vaccine, recovery is still very far away. We still expect the upward trend to end around the 1.2000 level and the US currency should adjust properly. However, remember that any fundamental hypothesis must be confirmed by technical analysis. 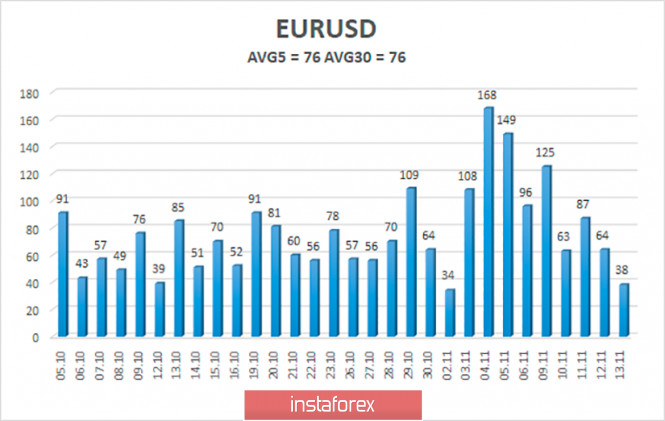 The volatility of the euro/dollar currency pair as of November 16 is 76 points and is characterized as “average”. Thus, we expect the pair to move today between the levels of 1.1758 and 1.1910. A reversal of the Heiken Ashi indicator down may signal a new round of downward movement.