AUD/USD is trading in the green and is expected to resume its upwards movement. The pair was into a minor corrective phase, but the temporary drop is over now, so the price could go for a new higher high.

The USD was weakened by the poor US inflation data published in the previous week, so the pair’s rally is natural as the USDX goes down. Technically, the outlook is bullish, AUD/USD could approach and reach fresh new highs in the coming days. 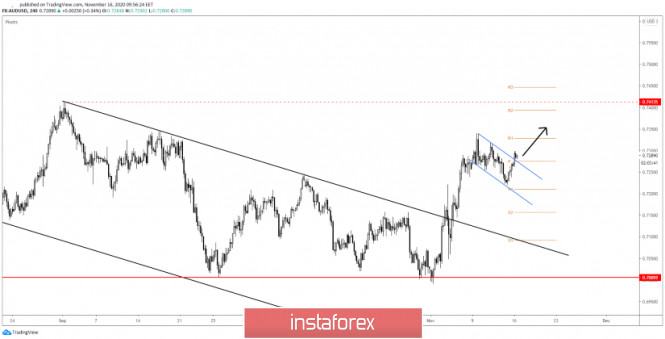 AUD/USD has escaped from the major descending channel, it has found a temporary resistance at 0.7339 level, it has decreased a little, and now it has registered an upside breakout from the minor down channel.

The down channels represent continuation patterns, so the uptrend should continue. The current aggressive breakout above the Pivot Point (0.7275) signals further growth at least till the R1 (0.7328) level. The 0.7339 is seen as a resistance level as well.

The current bullish candle signals buying in the short-term with a major near-term target at the 0.7400 psychological level. A major upwards movement will be validated if the pair closes and stabilizes above the 0.7413 static resistance.

The Stop Loss could be hidden under 0.7221 former low. I believe that only a drop under this level invalidates the bullish scenario.