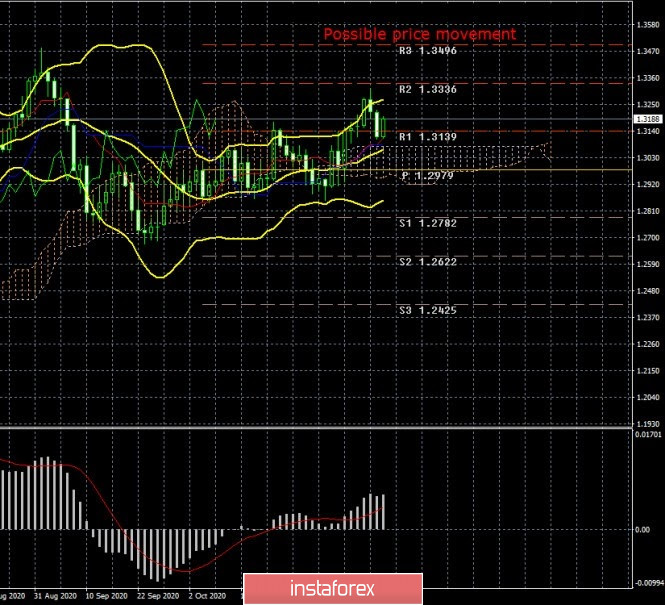 The GBP/USD currency pair started to adjust against the correction during the past trading week. We still consider the movement after September 23 as a correction against the fall from September 1. Thus, we consider the fall of the British pound on Wednesday and Thursday as a correction. If traders manage to fix the pound/dollar pair below the Ichimoku cloud, then we can talk about the resumption of the downward trend from the beginning of September 1. However, given the fact that the pound has been climbing for quite a long time, we are beginning to doubt that the downward trend will resume in the near future. The fundamental background for the pound remains extremely weak, however, market participants do not want to take it into account yet, and the pound, although not too strong, continues to strengthen. We have already said repeatedly that any hypothesis based on fundamental analysis requires confirmation of the “technique”. The fundamental background can say anything, but if market participants do not trade according to this background, we will not see the necessary results. Therefore, from a technical point of view, the upward trend is still maintained. But on the fundamental side, we continue to expect the British currency to fall. 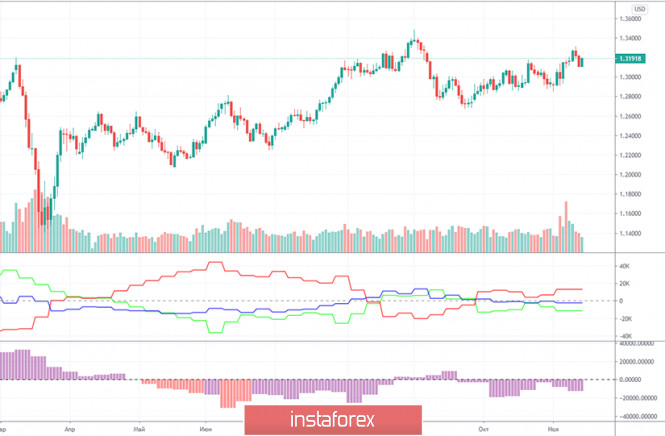 During the last reporting week (November 3 – 9), the GBP/USD pair increased by 250 points. Such a strengthening of the pound at that time is not at all surprising, since this was the period of the US presidential election, and the US dollar was declining against its main competitors. However, after this period, the pound began to grow. In general, it is the pound that has been growing in recent weeks. But the COT reports still don’t give us any really useful information. During the reporting week, non-commercial traders closed 3.3 thousand buy-contracts and opened 1.1 thousand sell-contracts. Thus, their mood became more “bearish”, and the net position decreased by 4.4 thousand, which is not so small for the pound. Recall that the total number of contracts opened by the “Non-commercial” group is 87 thousand. Thus, 4.4 thousand is 5%. As for the general trend among professional traders, the indicators in the illustration clearly show that there is no trend at this time. The green line (net position of non-commercial traders) on the first indicator constantly changes its direction. The second indicator also shows the absence of a trend, as professional traders increase the net position, then reduce it. Thus, no long-term conclusions or forecasts can still be made based on the COT report. We recommend paying more attention to “technique” and “foundation”.

The fundamental background for the GBP/USD pair last week was quite interesting. Most of the macroeconomic reports were again ignored, although overall they showed that the state of the British economy remains a concern. The unemployment rate is rising, GDP in the third quarter recovered less than experts expected, and industrial production also grew less than expected. As for more global topics, there is still no information on negotiations on a trade deal between the UK and the European Union. Negotiations are continuing, but it is not clear whether there is progress or not. The deadline set by Boris Johnson expires tomorrow, however, the parties said that negotiations will continue next week. It is also unknown how long they will continue. In general, complete uncertainty. In the UK, as well as in several other EU countries, anti-records for the number of diseases from the “coronavirus” are updated almost every day. This is despite the “relatively strict” quarantine in the country. Well, the Bank of England last week expanded its quantitative easing program, and in the coming months, it may also lower rates to negative values. How the pound manages to grow against such a fundamental background is unclear. After all, in fact, there is not single positive news from the Foggy Albion. If there were still disappointing news coming from overseas, we could conclude that demand for the dollar is declining, so the pound is strengthening. However, there is no frankly disastrous news from America right now either.

Trading plan for the week of November 16-20:

1) Buyers retain some chances of forming an upward trend. Most of all, the fundamental background continues to confuse, which absolutely does not support the British pound. However, long positions remain relevant with targets at the resistance levels of 1.3336 and 1.3496, as the “technique” does not signal the end of the upward trend yet.

2) Sellers are also quite weak now. We can even conclude that neither the bulls nor the bears are now eager to trade the pound sterling. The COT report shows that even major market players do not have a clear plan of action right now. Sellers need to return the pair below the Ichimoku cloud in order to expect a downward trend to form again in the long term. We are still inclined to believe that the fall in the pound will resume and will be quite strong. But this hypothesis, like any other, needs technical confirmation.