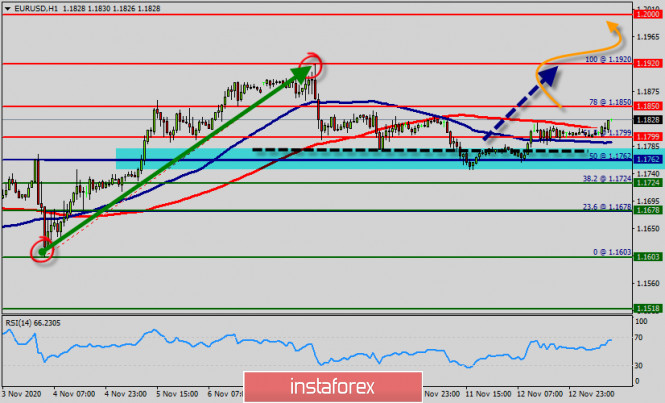 The EUR/USD pair broke resistance which turned to strong support at the level of 1.1762 since last week.

The level of 1.1762 coincides with a golden ratio (50% of Fibonacci), which is expected to act as major support today. The Relative Strength Index (RSI) is considered overbought because it is above 60. The RSI is still signaling that the trend is upward as it is still strong above the moving average (100).

This suggests the pair will probably go up in coming hours. Accordingly, the market is likely to show signs of a bullish trend.

In other words, buy orders are recommended above 1.1762 with the first target at the level of 1.1800. This suggests the pair will probably go up in coming hours.

As settling above the moving average 100 at 1.1800 will increase the chances of moving towards 1.1850, while surpassing it might extend trades towards the main resistance at 1.1920.

Thus, the market is indicating a bullish opportunity above the above-mentioned support levels, for that the bullish outlook remains the same as long as the 100 EMA is headed to the upside.

On the other hand, if a breakout happens at the support level of 1.1678, then this scenario may become invalidated.