Today’s fundamental data on the UK GDP growth rate in the 3rd quarter of this year did not greatly please buyers of the British pound, which maintained a downward correction for the pair by the beginning of the North American session. We must pay tribute to the fact that the bulls actively defended the 1.3172 support several times, forming good exit points for long positions on it. On the 5-minute chart, I marked these entry points. However, they were not implemented due to weak macroeconomic statistics. The upward movement was no more than 20 points. The third test of the level of 1.3172 led to its breakdown and the resumption of a downward correction. 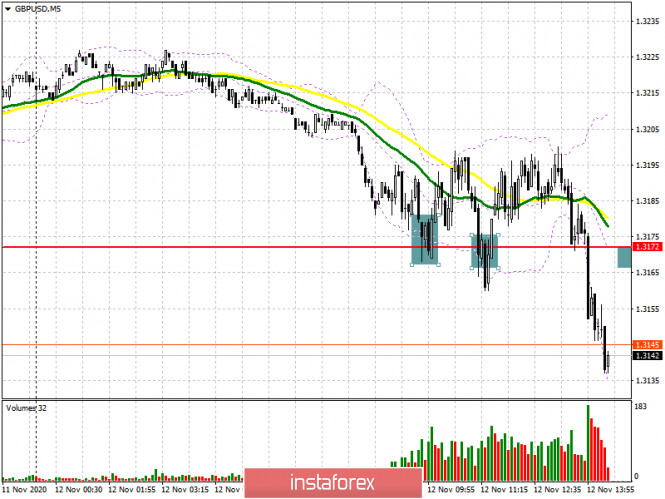 It is still difficult for buyers to offer something to the market, as everything is going against them. UK statistics have already pushed the pound below 1.3172, and now the whole calculation is on weak US inflation data, which will help the bulls regain this range. However, I recommend opening long positions from it only after returning and fixing at this level with the test from top to bottom. In this scenario, we can expect a re-growth of GBP/USD to the resistance area of 1.3248, where the moving averages play on the side of the bears. A longer-term goal will be a maximum of 1.3310, where I recommend fixing the profits. In the scenario of a further decline in GBP/USD, it is best not to rush with purchases, but wait for the test of a new large minimum of 1.3094 and buy the pound there for a rebound to correct by 30-40 points within the day.

The bears coped with the morning task and pushed the pair below 1.3172, however, it was not possible to wait for the formation of a convenient entry point for short positions, since the reverse test of this level did not occur from the bottom up. However, as long as trading is conducted below this range, the pressure on the pound will remain. The nearest target of the bears will be a minimum of 1.3094, with the first test of which it will be possible to observe a slight rebound of the euro up. A longer-term goal is the support of 1.3034, where I recommend taking the profit. If the inflation data disappoints, and the pound returns to the resistance of 1.3172, then it is also possible to open short positions in the continuation of the downward trend, but only if a false breakout is formed. If there is no activity on the part of the bears when the pair returns to 1.3172, I recommend that you do not rush to sell, but wait for the test of the larger resistance of 1.3248, below which the moving averages are just passing. There you can sell GBP/USD immediately on the rebound in the expectation of a correction of 30-40 points within the day. 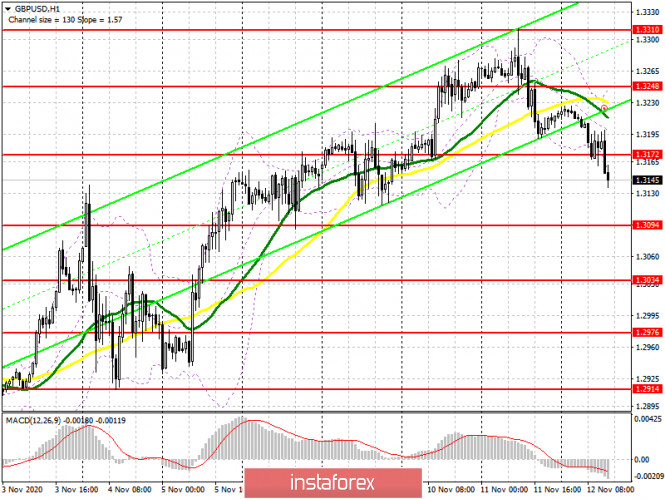 Let me remind you that in the COT reports (Commitment of Traders) for November 3, there was a reduction in long positions and a slight increase in short ones. Long non-commercial positions fell from 31,799 to 27,701. At the same time, short non-commercial positions rose just slightly to 38,928 from 38,459. As a result, the negative non-commercial net position was -11,227 versus -6,660 a week earlier, which indicates that the sellers of the British pound retained control and their minimal advantage in the current situation.

Trading is below 30 and 50 daily averages, which indicates a further fall in the pound.

If the pair grows, the upper limit of the indicator around 1.3248 will act as a resistance.