Most of the stock indices in Asia-Pacific are trading around yesterday’s value, expecting new pivot points since it was a holiday in the US. On the other hand, oil slightly made a downward correction after a strong surge the day before, however, we must remember that reports of a successful vaccine trial will add confidence to the markets, which will allow us to assume that the demand for risk remains until the end of the week.

Meanwhile, markets’ optimism may be weakened again by the fact that Mr. Trump refuses to admit defeat in the election. For the first time in 124 years, the loser did not congratulate the winner and did not give a final speech to his supporters. Moreover, he is actively dismissing the power block, replacing Pentagon’s chief and making a number of key changes in other departments.

Apparently, the Republicans are preparing for prolonged legal battles and do not intend to yield its power without a Supreme Court decision. Such a scenario can delay the resolution of the issue until January 20, which ultimately increases uncertainty and will contribute to the return of demand for defensive assets. Nevertheless, there will be some clarity by the end of this week.

The CAD net short position rose by 203 million over the reporting week, reaching -1.574 billion, but the target price has no direction and remains well above the spot price. 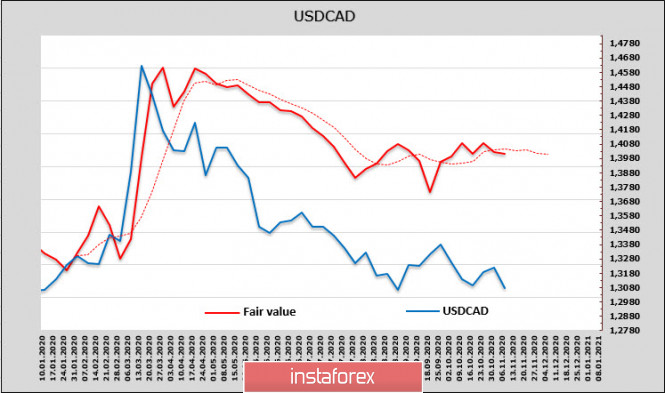 The Canadian dollar is following the general market trends, due to the lack of significant macroeconomic updates (the next report on manufacturing sales will be published on Monday, November 16). A recovery in oil quotes to a 2-month high and an overall risk demand based on “vaccine euphoria” allowed the CAD to strengthen to the support zone of 1.2950/70, but further decline looks unlikely.

Technically, the USD/CAD pair will continue to trade in a range. It is possible to return to the upper limit of 1.34, but there is not enough data to form a long-term direction, since the situation with the US elections is not completely clear, and the COVID-19 vaccines is unlikely to somehow contribute to the way out of the prolonged economic crisis, which began long before the pandemic.

Yen futures are still trading with a strong bullish edge. The target price is at 108.5, but there is no clear direction. 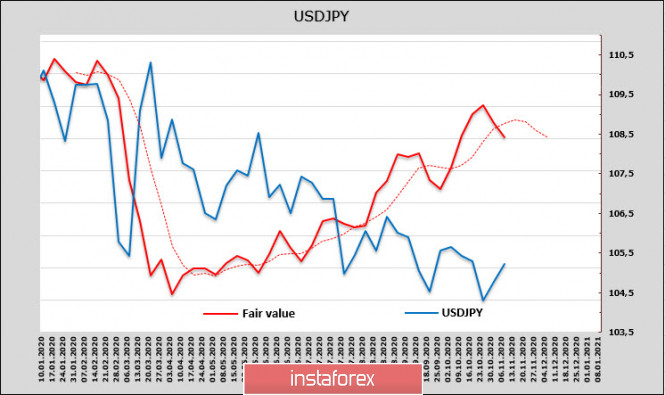 As expected, the yen returned above 105, and it is logical to say that the growth may continue. The reason will be the actions of the Japanese Cabinet of Ministers, which has been recently actively looking for reasons to increase the money supply in order to stop the economic downturn.

During the cabinet meeting on November 10, Prime Minister Yoshihide Suga instructed ministers to make a new package of spending on stimulating the economy, and its scale is likely to be bigger. If a package of 10-15 trillion yen was predicted several weeks ago, then there are a lot of high-profile people saying that such a package may not be enough. A number of key political figures, including the head of the LDP, spoke in favor of a much larger aid package. The new package is likely to approach 30 trillion yen, or $ 300 billion.

Incentives will have to be launched as a matter of urgency. While Japan’s main competitor, China, is steadily recovering economic growth, Japan’s industry will not come out of a long-term slump. Against this background, orders for engineering products in September declined again by 4.4%, the annual decline was 11.5%, and there are low chances of improving the situation without government intervention. 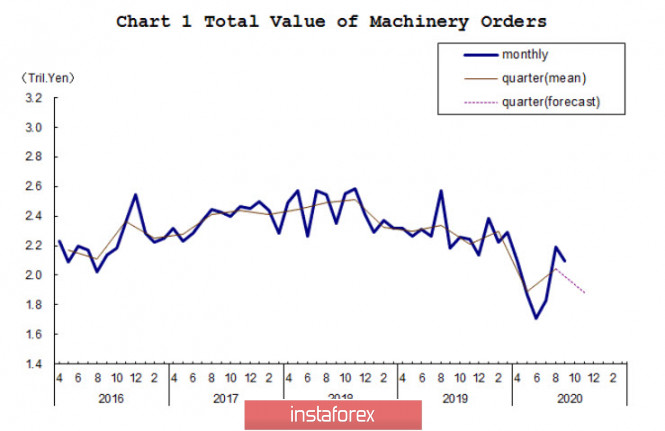 We have negative forecasts from the Bank of Japan and the government (Eco Watchers Index) also lowered the forecast to 49.1p, which corresponds to a further reduction in GDP.

Japan badly needs a weak yen to increase export competitiveness. Given the likely development of the trend for the dollar’s strengthening, it can be assumed that the yen will be held at 105, and the financial authorities of Japan will try to move the rate higher.

Moreover, we assume that testing the level of 106.13 will take place in the near future, after which a technical signal will appear in favor of the USD/JPY growth with the goal of 109.60/80.