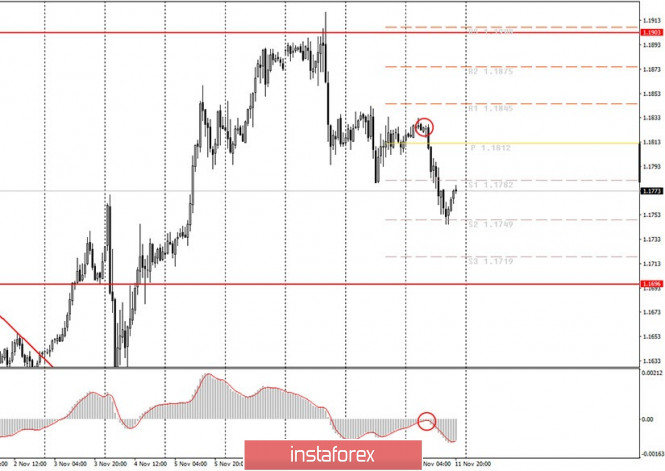 The EUR/USD pair moved down on Wednesday, as we predicted in recent days. The MACD indicator discharged as expected and generated a full and strong sell signal (circled in red in the chart). After this signal, the euro/dollar pair began a new round of decline and reached the first and second support levels of 1.1782 and 1.1749. The price rebounding from the second target caused quotes to stop dropping and so a correction began, which was also shown by the MACD indicator, moving up. Thus, novice traders could earn 25 to 55 points of profit during the day. As we expected, the pair is currently tending to the lower border of the horizontal channel at 1.1700-1.1900, which we have mentioned more than a dozen times. We consider the 1.1696 level as the ultimate goal of the entire movement. Unfortunately, there is still no way to form a downward trend line or channel that makes trading the pair much easier. Therefore, novice traders still need to track the MACD indicator readings. We expect a new round of correction, afterwards we will wait for a new sell signal and a new round of downward movement.

European Central Bank President Christine Lagarde delivered a speech, but she only casually touched upon the topic of monetary policy and the problems of the EU economy. Lagarde said that the ECB will continue to buy bonds and cheap loans from eurozone banks to continue to stimulate the economy and fill the banking system with liquidity. This confirms the ECB’s intentions to further stimulate the economy of the European Union. And given the new lockdown in Europe, the economy may start to slow down at the end of 2020 and it will need new incentives. No important reports from America today.

Several events are planned for Thursday, to which novice traders can turn their attention. First, the US will publish inflation for October, which is expected to remain unchanged at 1.3% to 1.4% y/y. If the actual value coincides with the forecast, then it is unlikely that this report will be followed by a reaction from traders. Secondly, Lagarde will deliver a speech in the European Union. If it again does not touch upon the topic of monetary policy and economics, then traders will not need to calculate a non-serious market reaction.

1) Buy positions on the EUR/USD pair are irrelevant at this time, since the upward trend has not been determined. We do expect to see a downward movement towards the 1.1696 level. Therefore, you can only buy the euro/dollar pair if the downward trend has clearly ended, which we do not see in the near future, or in case we overcome the 1.1903 level.

2) Trading for a fall is more relevant at this time, since the price rebounded from 1.1903. So now novice traders are advised to wait until a new round of upward correction has been completed and after that – for a new sell signal from the MACD indicator, which can be worked out with targets at 1.1749 and 1.1719. Unfortunately, there is still no downward trend line or channel, which complicates the process of working out an assumed downward trend.