In my morning forecast, I paid attention to the support level of 1.3261 and recommended opening long positions from it if a false breakout was formed, which happened. Let’s look at the 5-minute chart and analyze the entry points. We see how the bears’ unsuccessful sluggish attempt to regain the market below 1.3261 led to another false breakout, which only confirmed the preservation of the bull market at the beginning of the European session. A large increase to the high of 1.3315 was not surprising, after which the bulls began to take profits. As for sales from the level of 1.3315, I did not have them, as I was waiting for the formation of a false breakout and did not want to go against the trend. 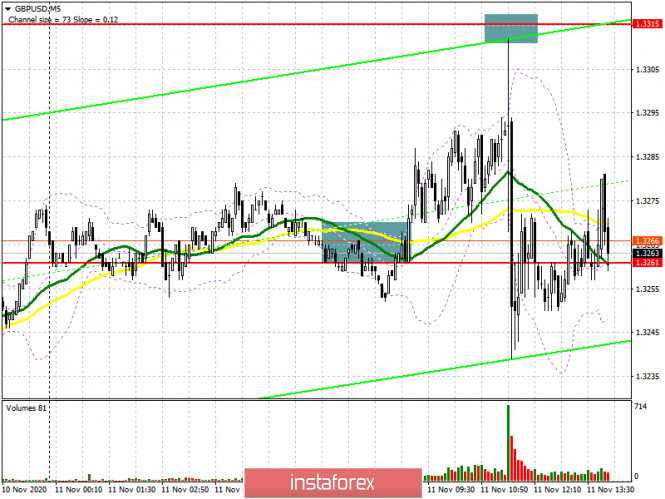 At the moment, the main task of buyers of the pound is to protect the support of 1.3242, which was formed in the first half of the day and which replaced the morning level of 1.3261. But only the formation of a false breakout there will be another signal to open long positions in the expectation of a repeated growth of GBPUSD to the maximum of 1.3310, where I recommend fixing the profits. It seems that the good news on Brexit is over, and yesterday’s euphoria of market participants from blocking Boris Johnson’s controversial bill in the House of Lords has also come to naught. Therefore, if there is no activity of buyers at the level of 1.3242, it is best to postpone long positions until the update of a larger minimum in the area of 1.3172, from where you can buy the pound immediately on the rebound in the expectation of a correction of 20-30 points within the day. It will be possible to talk about the continuation of the bull market only if it consolidates above the resistance of 1.3310, from which a direct road will open to the highs of 1.3378 and 1.3467.

To open short positions on GBPUSD, you need to:

The bears coped with the morning task, and now they can only count on a breakout of support at 1.3242. Only a consolidation below this level will be the first signal to open short positions in the expectation of a further downward correction to the area of the minimum of 1.3172, where I recommend fixing the profits. A longer-term target will be the area of 1.3094, however, this will only happen if the market moves down, which will form a new downward trend for the pair. In the scenario of growth of GBPUSD in the second half of the day, I recommend to postpone short positions until the update of the maximum of 1.3310, but it is best to open short positions from there only if a false breakout is formed. I recommend selling the pound immediately for a rebound after a new high of 1.3467, based on a correction of 20-30 points. 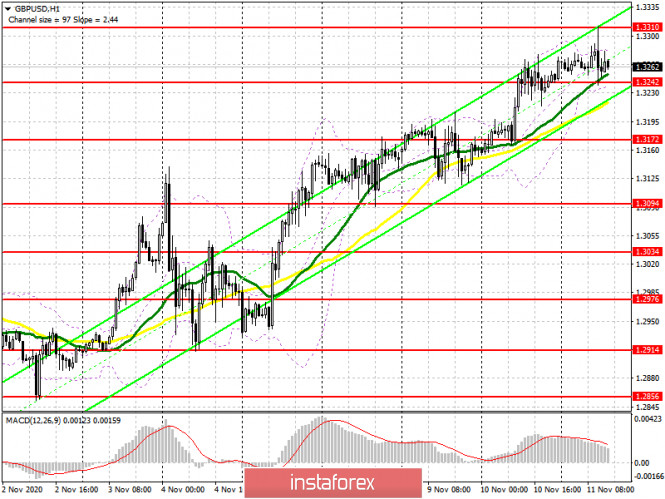 Let me remind you that in the COT reports (Commitment of Traders) for November 3, there was a reduction in long positions and a slight increase in short ones. Long non-commercial positions fell from 31,799 to 27,701. At the same time, short non-commercial positions rose only slightly to 38,928 from 38,459. As a result, the negative non-commercial net position was -11,227 versus -6,660 a week earlier, which indicates that the sellers of the British pound retained control and their minimal advantage in the current situation.

Trading is conducted around 30 and 50 daily averages, which indicates the sideways nature of the market and the possible end of the bull market.

Pressure on the pound will increase if the lower limit of the 1.3232 channel breaks.

Overview of the GBP/USD pair. November 27. Optimism about the trade agreement began to leave the market. Michel Barnier threatens