The euro traded with a range of 30 points on Tuesday, closing the day near its opening. Markets took a short break after Monday’s increased activity. The euro was unable to grow following oil (4.95%) and gold (0.75%), since the index of economic sentiment in the euro area fell from 52.3 to 32.8 in November and also on the understanding that the recent report of Pfizer about 90% effectiveness of their vaccine meant that 94 out of 43,538 people with covid were vaccinated, it is assumed that all vaccinated test participants were then infected with the virus to obtain statistical material. Of course, the participants in the experiment were not intentionally infected, and the message was a common PR move. 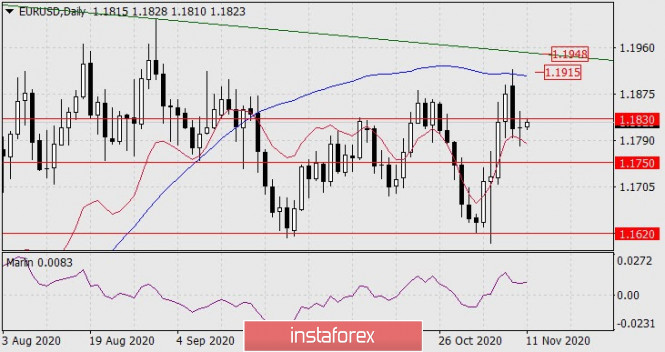 But does this mean that the euro will fall? This cannot be answered in the current situation, since the price is in a neutral position from a technical point of view – the price is settling below the target level of 1.1830 with the horizontally moving Marlin oscillator on the daily chart. There is interest in buying when the price is above the balance line, but the medium and long-term trend is adjusted downward when it is below the MACD line. Since no mood is clearly expressed, and if we assume that the fervor of the bulls has not yet dried up, then the price may try to attack the MACD line for the second time. Getting the price to settle below the 1.1750 level, will most likely cause a desire to reach the September low (1.1620). 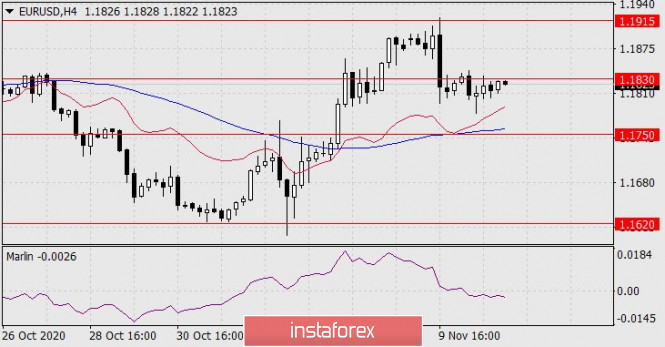 The price is settling above both indicator lines on the four-hour chart, while the Marlin oscillator is in the declining zone. Taken together, this may be a sign of consolidation with the intention to break down below the MACD line, near the target level 1.1750.