Optimism on stock markets is waning. The Dow Jones index still managed to grow by 0.90%, but the S&P 500 fell by 0.14%, the Nasdaq by -1.37%. On the one hand, investors were simply shifting from high-tech stocks to undervalued ones, on the other hand, optimism diminished with information that Pfizer’s vaccine can only be stored at very low temperatures (-70 C) and not so much protects against viral infection as reduces the severity of the disease. 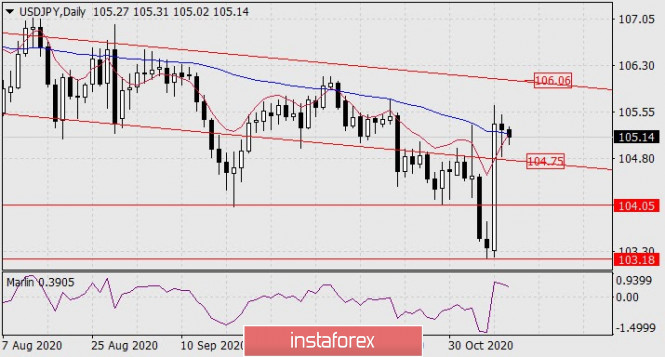 The USD/JPY pair lost only 9 points, but it is already down 15 points this morning. Of course, such dynamics is not an indicator of reversal sentiment, but the main thing here is that the price went under the balance and MACD indicator lines on the daily chart. This is the first sign of a change in mood. It will confirm that the price moves below the embedded line of the price channel at the 104.75 level. Then the first target will be the 104.05 level, then 103.18. The price moving beyond yesterday’s high will contribute to the pair’s growth to 106.06. 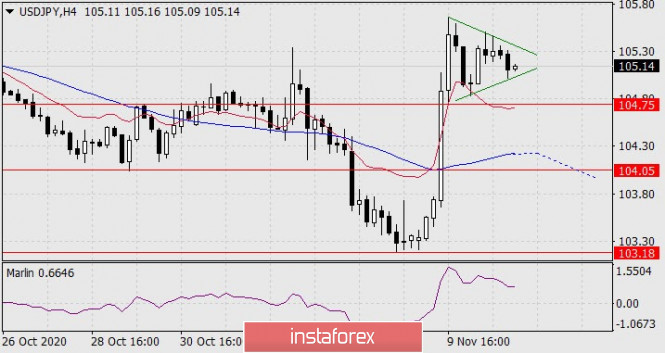 The situation is completely upward on the four-hour chart. A certain triangle is formed, afterwards the price is likely to accelerate to one side. Leaving the triangle may turn out to be false, which further increases the uncertainty of the current moment. The probability of a downside scenario is, however, 55%.