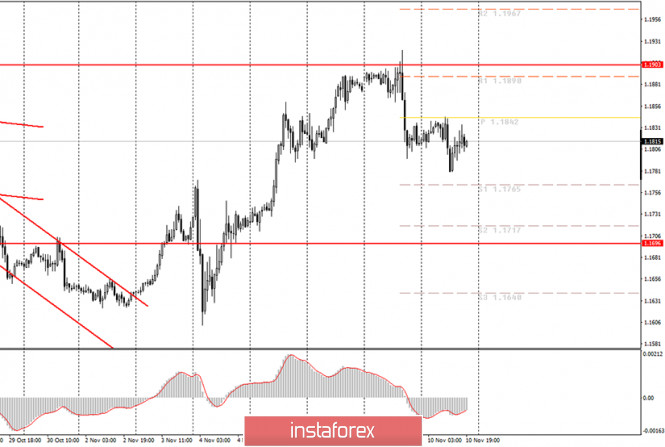 On Tuesday, the EUR/USD pair tried to resume the downtrend, but the movement was too hesitant and too rapid. Let’s analyze the situation in more detail so that novice traders can draw the right conclusion. First, this morning we mentioned that the MACD indicator was expected to reach the zero level due to an upward correction. Unfortunately, the correction turned out to be extremely weak and it was not enough for the indicator to approach the zero level. As a result, a new sell signal was formed with a little delay and the direction was not quite clear. The downward movement stopped very quickly and a new round of correction began. Thus, the price bounced back from the upper line of the sideways channel of $1.17-1.19. So, we still expect a downward movement to the lower boundary of this channel. However, once again we would like to emphasize that there is no trendline or a trend channel being formed at the moment. Thus, we can only track sell signals from the MACD indicator. However, even these signals are not strong and accurate enough right now. So, beginners should make their own decision on whether to trade the EUR/USD pair.

During the second trading day of the week, no macroeconomic reports or important statements were published in the EU or the US. After the US dollar’s rally on Monday, traders refrained from buying it (i.e. selling the EUR/ USD pair) on Tuesday. During the day, investors continued to evaluate the results of the US presidential election. Although the election race has come to an end, there is still a lot of uncertainty left for the US and its economy.

On Wednesday, not a single important release is scheduled in the European Union or the US. However, in the EU, President of the European Central Bank Christine Lagarde will give a speech on Wednesday. If Christine Lagarde makes some important statements, markets will immediately react to them. Yet, we do not think that the head of the ECB will reveal any unexpected or important information this time. Thus, tomorrow, traders can keep tracking the general fundamental background from the EU and the US or trade exclusively on technical factors.

2) Selling the pair looks a better choice at this time, as the pair has pulled back from the level of 1.1903. So, now novice traders should wait for a short-term upward correction to complete. Then, there should be a new sell signal from the MACD indicator, which can be used to test the targets at 1.1765 and 1.1717. Unfortunately, there is still no downtrend line or channel on the chart what makes it more difficult to trade within the assumed downtrend.