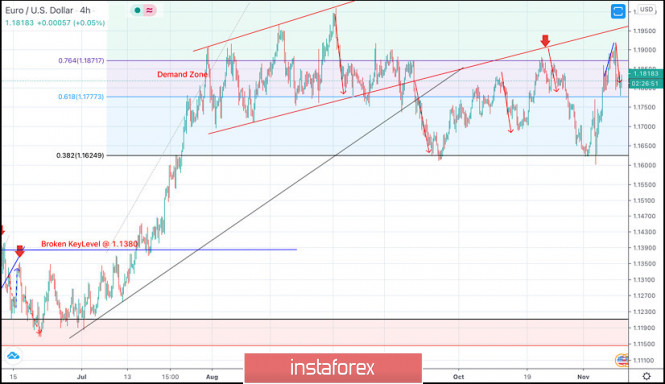 In July, the EURUSD pair has failed to maintain bearish momentum strong enough to move below 1.1200 (consolidation range lower zone).

Instead, bullish breakout was achieved above 1.1380-1.1400.This has lead to a quick bullish spike directly towards 1.1750 which failed to offer sufficient bearish pressure as well.

Bullish persistence above 1.1700 – 1.1760 favored further bullish advancement towards 1.1975 – 1.2000 ( the upper limit of the technical channel ) which constituted a Solid SUPPLY-Zone offering bearish pressure.

Moreover, Intraday traders should have noticed the recent bearish closure below 1.1700. This indicates bearish domination on the short-term.

The current bullish pullback towards the price zone of 1.1870-1.1900 should also be considered for signs of bearish rejection and another valid SELL Entry. S/L should be placed just above 1.1950.