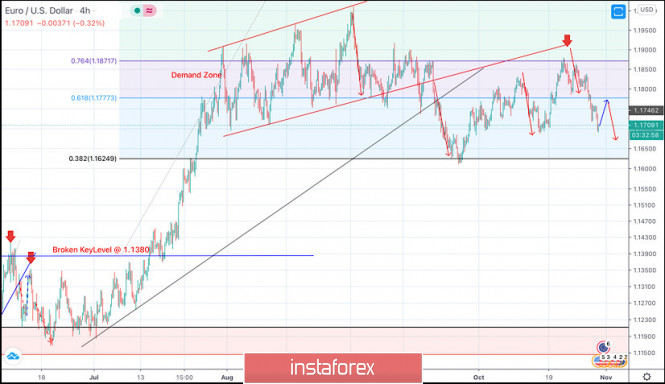 In July, the EURUSD pair has failed to maintain bearish momentum strong enough to move below 1.1150 (consolidation range lower zone).

Instead, bullish breakout above 1.1380-1.1400 has lead to a quick bullish spike directly towards 1.1750 which failed to offer sufficient bearish pressure as well.

Bullish persistence above 1.1700 – 1.1760 favored further bullish advancement towards 1.1975 – 1.2000 ( the upper limit of the technical channel ) which constituted a Solid SUPPLY-Zone offering bearish pressure.

Moreover, Intraday traders should have noticed the recent bearish closure below 1.1700. This indicates bearish domination on the short-term.

On the other hand, the EURUSD pair has failed to maintain sufficient bearish momentum below 1.1750. Instead, another bullish breakout was being demonstrated towards 1.1870 which corresponds to 76% Fibonacci Level.

Intraday Trend-Traders could have considered the recent bearish H4 candlestick closure below 1.1770 as a valid short-term SELL Signal with a potential bearish target located around 1.1700 and 1.1630 if sufficient bearish momentum is maintained.

Any bullish pullback towards the price zone of 1.1770 should be considered for signs of bearish rejection and a valid SELL Entry.