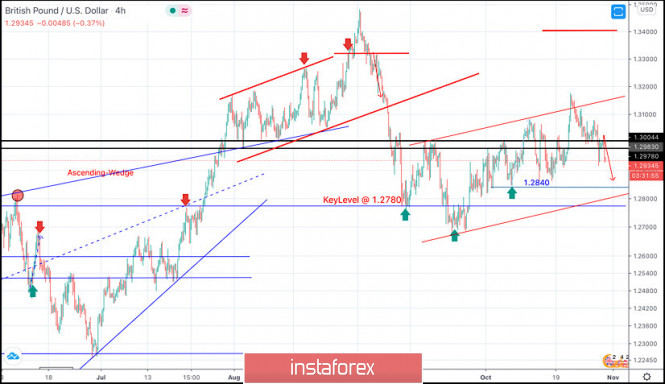 However, On September 1, the GBPUSD pair looked overbought after such quick bullish movement while approaching the price level of 1.3475.

A quick bearish decline took place towards 1.2780 where considerable bullish rejection brought the pair back towards 1.3000 and 1.3100 during the past few weeks.

The price zone of 1.3100-1.3150 (the depicted channel upper limit) remains an Intraday Key-Zone to determine the next destination of the GBPUSD Pair.

Bullish Persistence above the mentioned price zone of 1.3100-1.3150 was supposed to allow bullish pullback to pursue towards 1.3400 as a final projection target for the suggested bullish pattern.

However, the GBPUSD pair failed to do so, Instead, another bearish movement is probably targeting the price level of 1.2840 where bullish SUPPORT will probably exist.