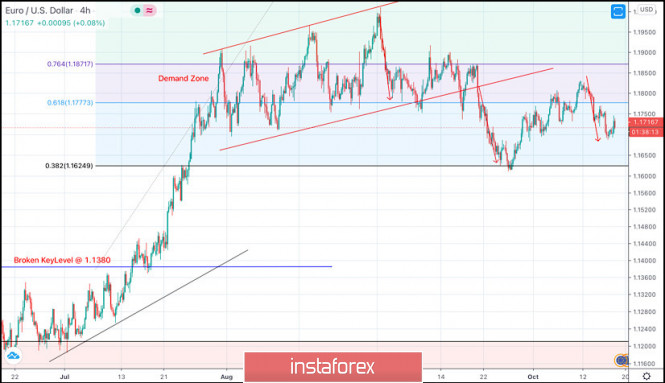 In July, the EURUSD pair has failed to maintain bearish momentum strong enough to move below 1.1150 (consolidation range lower zone).

Instead, bullish breakout above 1.1380-1.1400 has lead to a quick bullish spike directly towards 1.1750 which failed to offer sufficient bearish pressure.

Bullish persistence above 1.1700-1.1760 favored further bullish advancement towards 1.1975 where some considerable bearish rejection has been demonstrated.

The price zone around 1.1975-1.2000 ( upper limit of the technical channel ) constituted a SOLID SUPPLY-Zone which offered bearish pressure.

Moreover, Intraday traders should have noticed the recent bearish closure below 1.1700 – 1.1750 as an indicator for a possible bearish reversal.

As expected in previous articles, the price zone of 1.1850 – 1.1870 has been standing as a solid SUPPLY Zone providing considerable bearish pressure as well as a valid SELL Entry if any bullish pullback recurs soon.

Further bearish decline should be expected towards the next Fibonacci Level at 1.1625 where price action should be watched for possible bearish continuation below it.