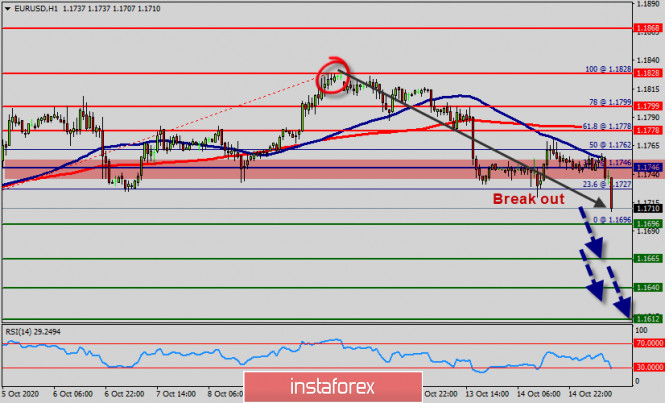 After a breakout at the price of 1.1746 this morning, support now becomes resistance at the level of 1.1746.

The EUR/USD pair broke resistance which turned to strong resistance at the level of 1.1746.

The level of 1.1746 coincides with 38.2% of Fibonacci, which is expected to act as major resistance today.

Since the trend is above the 38.2% Fibonacci level, it means the market is still in a downtrend.

From this point, the EUR/USD pair is continuing in a bullish trend from the new support of 1.1746.

A bearish outlook remains the same, as long as the 100 EMA is pointing to the downside. RSI (14) sees major descending resistance line acting as resistance to push price down from the spot of 1.1746 – 1.1762 .

We still expect the bearish trend for the upcoming sessions as long as the price is below 1.1746 level. Also, it should be noticed that, the level of 1.1746 represents the daily pivot point.

Therefore, strong resistance will be formed at the level of 1.1746 providing a clear signal for sell deals with the targets seen at 1.1696.

Otherwise, the breakdown of 1.1778 will allow the pair to go further up to the levels of 1.1800 and 1.1830. Besides, is should be noted that all positions must be closed before the closing bell in New York session to day.

But overall I still prefer a bearish scenario at this phase. Moreover, any downside pullback from the price of 1.3823 now is normal, because on the whole we remain bearish at present.