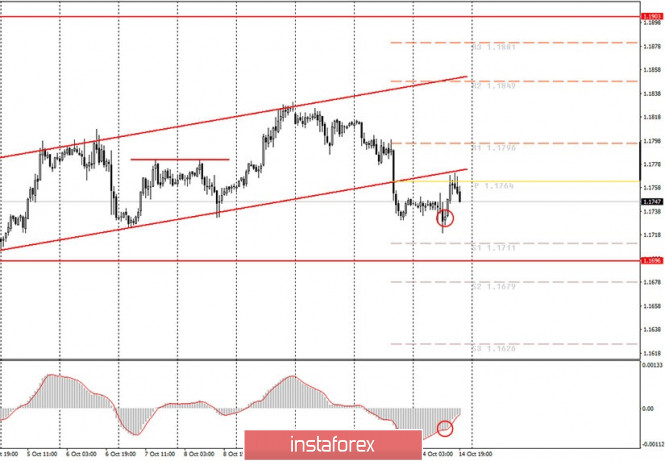 The EUR/USD currency pair started an upward correction on Wednesday, October 14, as we expected in the morning. However, before doing so, the pair’s quotes tried to continue the downward movement. A very interesting and remarkable situation has developed in which the MACD indicator has discharged at a non-rising price, and then it moved down again after a small downward impulse. In the morning, we warned novice traders that they should wait for the MACD indicator to discharge to zero. Since this did not happen, there was no need to open short positions on a new sell signal. Moreover, the signal, as expected, turned out to be false. After quotes slightly fell, the price immediately turned to the upside and began an upward correction, which could end near the 1.1764 level. If this is the case, then a new reversal of the MACD indicator can be regarded as a sell signal that can be worked out. The nearest targets for sell positions are the levels of 1.1711 and 1.1696.

No macroeconomic background for the pair today. Traders had nothing to pay attention to during the day. There was a fairly important sign, but secondary in fact – a report on industrial production in the eurozone, but its real value almost coincided with the forecast, so no reaction followed. In addition, European Central Bank President Christine Lagarde delivered a speech today, however, she did not mention anything important, as we expected. The price jumped 30 points in the afternoon, which can hardly be considered a reaction to any event. We are inclined to believe that today’s trading was held on pure technique. By the way, volatility has not been very high in recent days.

Lagarde is scheduled to speak again on Thursday, October 15. Recently, the ECB president speaks almost every day. And it is clear that she does not provide traders with new and important information. Thus, most likely, Lagarde will not report anything important tomorrow as well. Data on the number of applications for jobless benefits in the United States is also set to be released on Thursday, which many consider an absolute indicator of unemployment. The number of secondary applications may be reduced from 10.976 million to 10.7 million. So in any case, the reduction is good for the US economy and the dollar. However, markets are unlikely to process this report. Most likely, technical and political factors will remain in first place. Recall that the presidential election is approaching in America, and Democrats and Republicans still can not agree on a new package of assistance to US citizens, unemployment and the most affected by the coronavirus crisis sectors of the economy.

1) Buy positions on the EUR/USD pair have ceased to be relevant at the moment, since the pair has left the ascending channel and will now form a new downward trend. Thus, in order to consider long deals, one should wait for new technical patterns, such as trend lines or channels, that would support the upward movement.

2) Sell positions are current at the moment. An upward correction (albeit a small one) has taken place, so now you should wait for the MACD indicator to turn to the downside to open short positions with targets at 1.1711 and 1.1696. If the reversal does not follow in the next few hours, then it will be much more difficult to track it further, since it is already at night for many traders. Nevertheless, in the morning we will conduct a new analysis of the situation and make new recommendations.