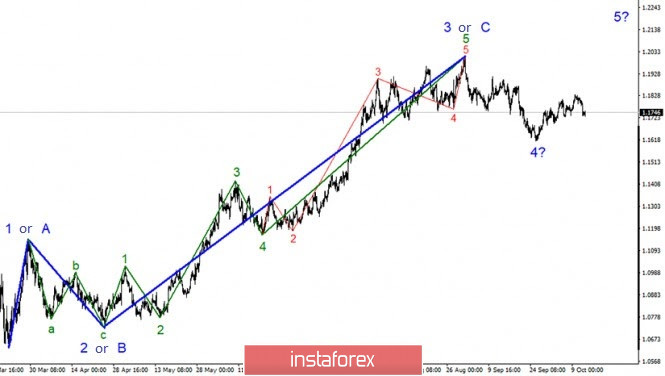 The wave marking of the EUR/USD instrument in global terms still looks quite convincing and wave 4 is quite complete. Thus, the main option remains to increase quotes from the current levels within the framework of building wave 5 with goals located above the maximum of the expected wave 3 or C. This means that the instrument will increase to at least 20 figures or even higher. There is no question of adopting a more complex form of wave 4 at this time. 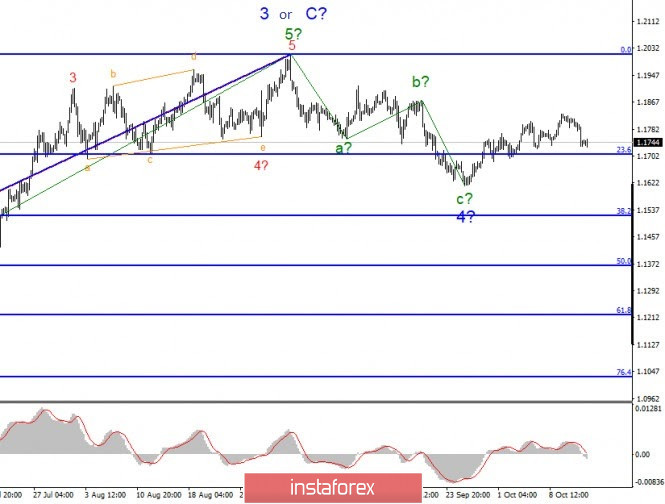 The smaller-scale wave markings still show that the proposed wave 4 has assumed a three-wave form and is probably complete. If this is true, then the price increase will continue within wave 5. However, doubts have begun to arise that the current price increase is really wave 5. It is quite possible that wave 4 becomes more complex and takes the form of a-b-c-d-e. This option is supported by the fact that the instrument failed to make a successful attempt to break the maximum of wave b at 4. If this assumption is correct, then the current positions will resume the decline in quotations.

The US currency was quite unexpectedly in demand at the auction yesterday. The instrument lost about 80 basis points during the day. Thus, it is likely that it started building a new downward trend movement. The section of the trend from September 25 turned out to be very long, so there are doubts that it is part of the upward wave 5. The news background for the EUR/USD instrument remains extremely contradictory. According to the report of ZEW Institute yesterday, there’s a marked deterioration in economic conditions, economic sentiment and business sentiment in Germany and the EU. Moreover, the second wave of COVID continues to develop in Europe, so the economic situation may actually worsen in the coming months. Christine Lagarde, the head of the ECB, has repeatedly expressed concerns about the coronavirus. Thus, they are clearly not groundless.

But in America, the inflation report was released yesterday which did not show any major changes in the indicator. The consumer price index went up to 1.4% yoy and 0.2% mom in September. The consumer price index excluding food and energy prices remained at 1.7% yoy and went to 0.2% mom. Overall, these numbers are not strong or unexpected. Thus, I believe that they were not the reason for the strong decline in the instrument’s quotes yesterday. Most likely, there are no reasons for the increase in US currency quotes on the eve of the day. If the markets continue to build a downward movement of the trend from September 1, then we just watched the construction of a prolonged wave d, and now the markets will move to new sales of the instrument within the wave e. If this assumption is correct, the decline in quotations will continue and the impact of future US presidential elections and the lack of agreement between Democrats and Republicans on a new aid package will be absent.

The Euro-Dollar pair has presumably completed the construction of a correctional wave 4. However, the absence of a break of the high of wave b in 4 suggests a possible complication of all of wave 4. Thus, at this time, I would still recommend purchasing the instrument with the objectives located about settlement marks 1,2012, which corresponds to 0.0% of Fibonacci on every MACD signal based on building a global wave 5. However, in the case of a successful attempt to break 23.6% level will come into force alternative – with the increasing complexity of wave 4.