Today’s review of the North American dollar pair will be the start of the weekly timeframe even though it is Wednesday. Since the USD/CAD pair is rarely considered, I would like to present a more complete picture of the price movement of this interesting trading instrument. 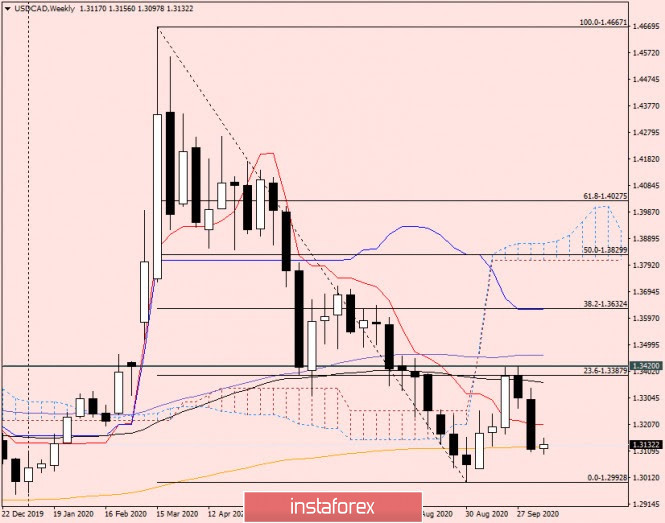 There is quite an interesting picture on the weekly timeframe. After a strong upward momentum and reaching 1.4667, the bulls’ strength on the instrument was exhausted and control over the pair passed to the bears. Having stretched the grid of the Fibonacci tool to a decrease of 1.4667-1.2993, it is worth paying attention to the fact that the pair corrected only to the first pullback level of 23.6 Fibonacci. Usually, such a minor correction occurs during a strong trend, which in this case is a bearish one. I also draw your attention to the strong resistance of sellers near 1.3420. It is characteristic that the bulls on the instrument tried to overcome this mark for two weeks in a row but these attempts were not crowned with success. It is also very characteristic that after the decline, the pair found support near the most important psychological and technical level of 1.3000. Thus, we can conclude that USD/CAD demonstrates a fairly decent technique.

At the auction of the current five-day period, the quote shows a slight strengthening. If it continues, we can expect a rollback to the previously broken red line of the Tenkan Ichimoku indicator, which is located at 1.3205. If the weekly trading ends above this line, it is possible to continue the rise. The target of which will be 1.3360. In addition to the fact that this is a fairly strong technical level, there is also a black 89 exponential moving average. The bearish scenario will continue only after a true breakout of 1.3000. 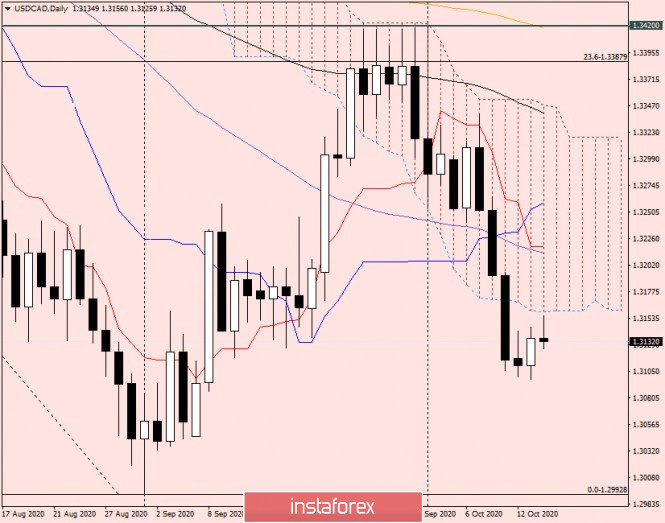 The daily chart also shows a bearish picture. After the pair came down from the Ichimoku Indicator Cloud, an exact pullback was given to its broken lower border. After which the quote bounced. However, even if attempts to return to the cloud are resumed, it will be quite problematic for the pair’s bulls to stay within it, in my opinion. The fact is that in the price zone 1.3213-1.3258, there are 50 simple moving average touching the Tenkan line and the Kijun line runs above it. I believe that in the selected zone, if the pair reaches it, there may be strong resistance, which will turn the course to decline. In the meantime, at the end of this article, resistance is provided by the broken lower border of the cloud, which passes at 1.3160.

Taking into account the technical picture on the two timeframes considered, I consider sales to be the main trading recommendation for this currency pair. I suggest that we consider opening short positions on the USD/CAD pair near 1.3150/60 or after rising to the price zone 1.3213-1.3258. If there are no corrective pullbacks to the indicated prices, you can try selling from current prices more aggressively and riskily. Another option for opening short positions is to roll back to 1.3000 after a true breakout of this mark.