Despite yesterday’s statements by British Foreign Secretary Dominic Raab that in the run-up to the European Union summit, the existing problems for concluding a Brexit deal can be resolved, the British pound has fallen strongly against the US dollar. It is quite possible to assume that such a negative impact on the price dynamics of the British currency was caused by ambiguous data on the UK labor market. At the same time, against the background of an increase in the number of COVID-19 infections, takeaway sales showed a significant increase, which amounted to 9.4% over the past 12 weeks. However, given the recommendations of the authorities that you should leave your homes as little as possible, this is quite natural and logical.

Today, macroeconomic statistics from the UK are not expected, and the United States will publish reports on changes in producer prices at 13:30 (London time). I believe that this data, as well as market sentiment, will have some impact on the price dynamics of the GBP/USD currency pair. However, as usual, I am more inclined to assume that the technical picture will indicate the future prospects of this tool. 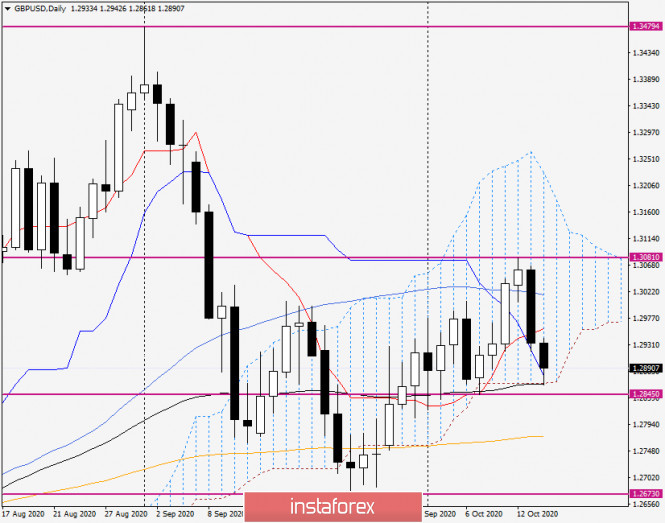 As a result of the strong fall shown in yesterday’s trading, the pound/dollar pair did not hold above the most important level of 1.3000 and ended the session on October 13 at 1.2933. Today, at the time of writing this article, the downward trend continues and GBP/USD is already trading under the important level of 1.2900 (near 1.2890). The quote is gradually approaching the lower border of the daily Ichimoku indicator cloud, next to which is the blue Kijun line and the black 89 exponential moving average.

If the price goes down from the cloud and the support line breaks 1.2845, the bearish sentiment for the pound will increase significantly, which will give every reason to expect a further decline, the nearest targets of which will be 1.2800 and 1.2773. At the same time, it is worth noting that the orange 200 exponential moving average is located at the last mark, which is able to stop the fall and provide good support. If the pair finds support higher and does not come out of the Ichimoku cloud, we can expect a pullback to the Tenkan and Kijun lines broken yesterday, which are at 1.2958 and 1.3017, respectively. However, for such a course of trading, market sentiment must change dramatically. As you can see, this is not happening yet. 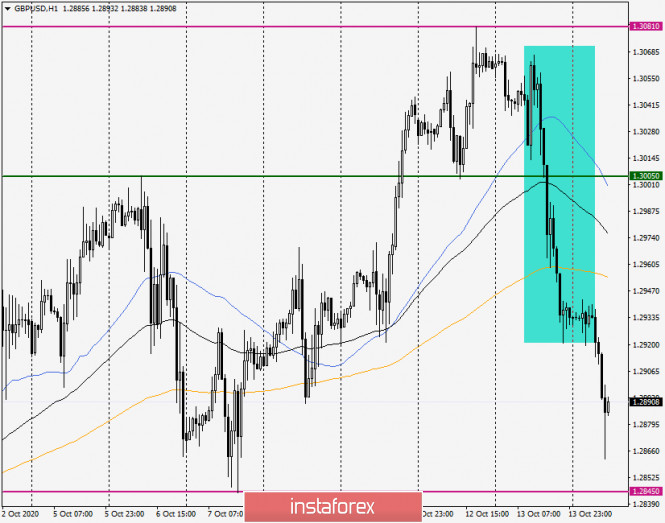 On the hourly chart, the bearish mood of the pair is particularly clear. After a slight consolidation, today, at the time of writing, the pair resumed a strong downward trend. And then I would pay attention to the figure of technical analysis (“Inverted flag”). This figure is a continuation figure, which means that it is time to expect a further weakening of the British currency against the US dollar, which is what is happening. In this situation, the main trading recommendation looks like sales, however, it is not necessary to open them above the support level of 1.2845 and it is not necessary until the pair exits the daily cloud of the Ichimoku indicator. This positioning is quite risky, thus, I suggest waiting for the true breakdown of the support level of 1.2845 and consider opening short positions with the nearest targets at 1.2800 and 1.2775.