IMF’s report on global financial stability, together with the sharp drop in business confidence in the eurozone, left no chance for risky assets to recover further in the market. Then, the United States released a relatively good report on inflation, thereby finishing off those who believed in the continued strengthening of the euro in the short term. 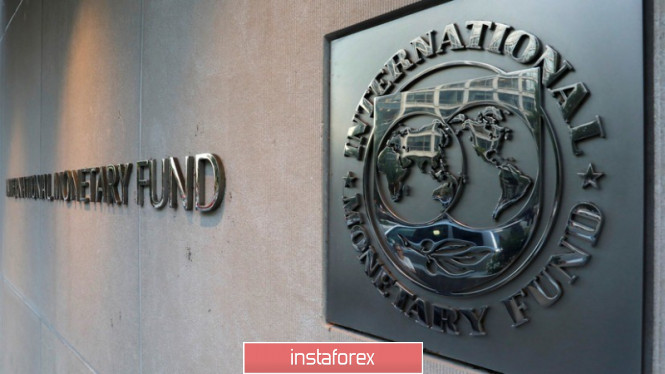 Yesterday, the International Monetary Fund presented a report on global financial stability, which indicated the growing vulnerability of some countries. Most likely, this refers to Europe, particularly Italy and Spain, as these two countries have every chance to break record lows this year.

The IMF also warned of the risks of taking more and more debts amid the pandemic, which the Federal Reserve has been doing in the United States.

Nonetheless, the organization tweaked its economic forecast for 2020, leaning on a somewhat less severe recession in the world GDP than its prediction last June. It believes that the world GDP will only contract by 4.4% in 2020, while the US GDP will shrink by 4.3% and then grow by 3.1% in 2021. The global recovery will be long, uneven and uncertain over the medium term, which suggests that developed countries will continue implementing a zero interest rate program, pumping money into their economies, thereby creating fertile ground for higher inflation in the future.

As for economics statistics, a very weak data was released for business confidence in Germany, and the reason for this was the deteriorating situation with the coronavirus, as well as the slowing economic recovery. Most of the sharp decline was seen in sentiment about the economic outlook, which, until now, remains bleak in the eurozone. Growth was recorded only in the indicator of ZEW.

So, according to the ZEW Institute for Economic Research, the index of economic sentiment in Germany fell to 56.1 in October, much lower than its previous level, which was 77.4 points. Meanwhile, the assessment of the current economic situation rose to -59.5 points from -66.2 points in September, while economists had expected the figure to be -72.0.

Low inflation was also recorded in Germany, to which Destatis reported a 0.2% decrease in the final consumer price index in September, amounting to just 0.4%. This reaffirms that there is a need for larger stimulus from the European Central Bank. However, the decline could also be just because of the reduction in VAT, which operates within the framework of the fiscal policy of Germany, which came into force on July 1 this year.

Meanwhile, the United States, unlike Germany, has seen a huge rise in inflation, increasing by 0.2% in September as compared to its level in August. The core CPI, which excludes volatile product categories, also gained 0.2%.

The main reason for this increase was the 6.7% jump in prices for used cars, as there was a huge demand for vehicles after the first wave of the coronavirus pandemic. Prices have also increased in restaurants by 0.6%, which further fans inflation in the country. The growth was partially offset by a sharp drop in gasoline prices, where the indicator fell immediately by 5.3%.

A slowdown will occur only if tougher restrictive social distancing measures are introduced.

The health of small businesses also continues to improve in the US, which signifies a normal economic recovery in the country. The report published by the National Federation of Independent Business said that the US Small Business Optimism Index rose to 104.00 points in September, up from its 100.2 points in August this year. Economists had expected the index to only reach 101.3. Positive sentiment among top managers of small companies is a good signal for the economy, as it will lead to increased investment and the creation of new jobs.

With regards to the EUR/USD pair, the outlook continues to deteriorate, but for this to come to the fore, the bears need to push the quote below the support level of 1.1735, as such will make it easier for the euro to reach the price levels 1.1680 and 1.1640. However, if demand for risky assets returns, although this is unlikely under the current conditions and statistics, the quote could return above the level of 1.1780, which will make it easier for the bulls to move back to weekly highs 1.1825 and 1.1870.